next 4 items best read in order

IF ITS RED, ITS EMBARRASSMENT

The GCNP segment on the river left, south, should be colored red for embarrassment—mine.

On the November trip, that segment certainly was a canyon too far, although it certainly is the bona fide western end of the Canyon on river left. indeed, I have not talked to anyone who has checked out the entire length of the north-south ridgeline that divides the Grand Canyon drainages on the east from the washes running west into Lake Mead country. Looks like an uplifting hike.

003. Finding a Boundary Out West

ROUGHING IT ON THE BOUNDARY:

The protective boundary between Grand Canyon National Park and Grand Canyon - Parashant National Monument ought not exist. The Grand Canyon lands in the entity Lake Mead National Recreation Area east of, above, the Grand Wash Clilffs ought to have been reconciled with the National Park long ago. The north side hinterland of the Grand Canyon drainage is comprised of the north, upstream sub-drainages of Parashant, Whitmore, and Toroweap Canyons, all important in the approach to, and the explanation of, what goes on in this middle section, heavily volcanics-inflected, of the Grand Canyon. This area has remained under BLM administration as part of the Grand Canyon - Parashant National Monument. Were this stew of four jurisdictions (see BLM Arizona Strip map below) administered and treated together, the easy, thorough, public presentation, comprehension, and perception of the Canyon would be the natural over-riding goal. Separated, the four are problematic cooperators in protection and presentation policies.

Elsewhere in this blog, I tell the stories of how these complicating boundaries came to be. In November, I experienced their impact directly by spending a few days with colleagues on the area’s roads and tracks, mostly in a vehicle, with some time on foot. In this and  accompanying posts, I am trying to come to grips with what we saw added to what I can interpret from on-line documentation in the important matter of these hindering boundaries; how they affect what we see and know.

002. Toward the Westernmost Canyon

A JOURNEY OF THE IMAGINATION

As mentioned in the essays accompanying this one*, a group of the Grand Canyon’s friends did take vehicles November 2021 down the Shivwits Plateau to visit some of the southward-pointing peninsulas. Since I still have not walked or even driven across all these far-west Grand Canyon lands, I am dependent for this discussion on maps, photos, and aerial views.

“003. Finding a Boundary Out West” a close look at the ground.

“004. Trimming the Turkey Wattle” jumps the river to look south.)

Scanning a map of the Grand Canyon,  starting mid-Canyon, the Kanab-Havasu area, then west downriver around the big southern bend at Diamond Creek, up northwest beyond the dark splotch of the Shivwits Plateau, to the end: 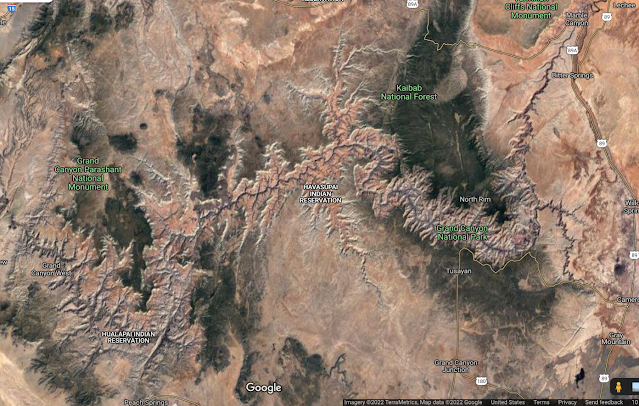 Topographical stand-outs are the hanging peninsulas of the Shivwits, the westernmost of the four northside plateaus into which the Canyon has dug: big guy Kaibab on the east, then flattish Kanab, volcanic Uinkarets, and Shivwits. These names were derived (it makes the best story) from conversations whiteman explorer-in-chief John Wesley Powell had with members of Southern Paiute bands, who were, of the Canyon’s original Americans, most severely negatively affected by decimation and forced removal.

WELCOME TO A WILD AND LITTLE-KNOWN WEST

November 2021, seven comrades* of the Grand Canyon traveled with me for a few days to get some notion of how the land lies in the not-much-visited northwestern Canyon — north of the Colorado, the Shivwits Plateau region. I returned chagrined at how much I learned and have yet to learn after 60 years. (An Arizona map will put the area in context.)

This and accompanying entries will explore and make suggestions on matters to do with presentation and protection of the Canyon “out there” beyond the usual vistas. In order to make sense of my ruminations, Ive written four essays, with different emphases, some overlap, and  aimed at the general goal of a coherent understanding of this west portion of the Grand Canyon.

GODPARENT FOR THE ANTHROPOCENE

THE GRAND CANYON:
ENVIRONMENTAL ICON OF THE EARTH SYSTEM --
AND FOR US AS A PART OF IT
Let's stand at Mather Point on the Grand Canyon's South Rim, looking out over the world's most famous layout of this Earth’s geological epochs-- 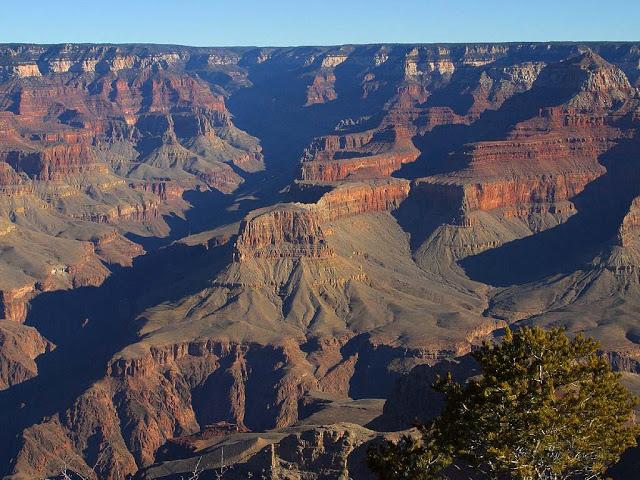 not all of them, but some of the earliest, and certainly the latest, the Anthropocene: the epoch of us, humanity’s own. Just a skim on the mighty schists of the Archean, the gigantic walls of the Mississipian Redwall, the white band of the Permian Coconino, yet here it is, our Anthropocene of the concrete and asphalt right under our feet : 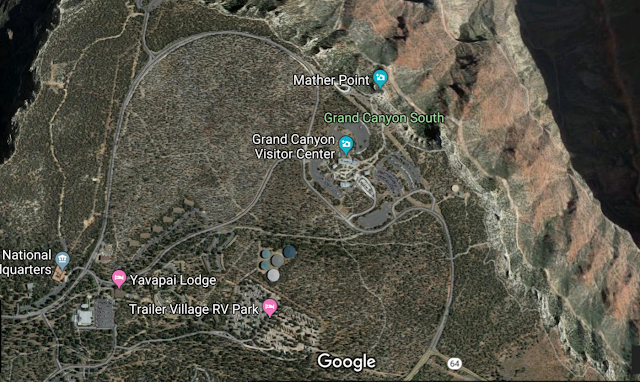 and spreading south in acres of parking lots & sidewalks, metal protective railings and, off to our right, the sturdy tanks storing water brought from springs out of sight on the north side. through 12 miles of pipeline, crossing a steel suspension bridge over the Colorado way down at the bottom before climbing up the old walls beneath us.

Not too far off to the west, once even visible from nearby Maricopa Point, are the remains of a uranium mine, a 1500’ hole dug down through and behind the Canyon's walls to reach the mine's toxic treasure. These Anthropocenic evidences may rust and erode, but traces will remain to tease geologists in the far future with the power and glory of Homo sapiens, a species that wrote its passage into the stone for the ages, as we altered the Earth System, Gaia some call it, to burn its forests and melt the ice sheets remaining after the last glaciation's end, the event 12 millennia ago that set us off to populate, explore, tame, and exploit that System beyond its capability to support us.


Fortunately for those of us who consider ourselves advocates for, lovers & protectors of, the Grand Canyon, 50 years ago the United States, after a grand public debate, chose to abandon a grandiose Anthropocenic dream, a scheme that would have produced the most long-lasting and visible industrial artifact of them all -- the electrification of the Grand Canyon founded on two large concrete hydroelectric dams with all their accompanying powerplants & high-tension lines, highways, residential & commercial urban support sites, mass recreation facilities, etc., etc.
Read more »
Posted by jeff ingram at 8/22/2021 04:18:00 PM No comments:

I've lived to see the day!!

--headline in today’s Guardian (and lots of other places):

And aren’t the shades of the 1960’s water warriors rising up in their righteousness at the declaration that the Colorado River is officially water-short in the lower basin:
There’s Mike Ely of California, elevated high above his grave chortling over his victory at securing the priority of California’s Colorado River allotment regardless of anybody else—no cuts for his masters.
And rumplestiltskin-like Wayne Aspinall of Colorado, hopping up and down—“I told you so! I told you so! I told you there wouldn’t be enough water.”
And Washington’s Henry Jackson serenely contemplating from on high the full-flowing Columbia, untapped by pipes from the Columbia to Lake Mead in order to service Los Angeles and Pinal County farmers.
And the Arizonans, as always at each others’ throats, roaring about how they were cheated of their fair share of the Colorado — “I got my canal; who cares if its not full”, boasts Carl Hayden, slapping down the states-righters. “We did the best we could”, chorus the Udall brothers — “It was those damn anti-dam people”; “It was those insatiable Californians." “It was the Northwest refusing to share its bounty — we’re glad its burning.”
And Floyd Dominy, roasting in his own special hot spot: “They should have let me build my dams; I would have saved the world.”
And David Brower, well, I bet he is off somewhere in the mountains, scaling still another peak. I hope so.
Posted by jeff ingram at 8/16/2021 07:11:00 PM No comments: