Text to identify the Park is now on all the maps, using Filter,  Correct Camera Distortion, and changing the angle by 1.25 to 1.6 degrees. Map size increased to ~160 MB. The font was Garamond, and in a dominant size. Have to click on spot to locate start before typing any letters, and can move by going outside text and holding down. When I flattened the layers and saved as  JPEG, the size is ~19 MB
Kinko's says the cost of printing is about $10/sq-ft, or $30 a map if regular size.
Posted by jeff ingram at 4/30/2010 10:29:00 PM No comments:

The dream of damming the Grand Canyon lasted not even a century. Were I to give in to the temptation of organizing our untidy affairs into themes and periods, the second decade of the XXth century would be akin to  a staking of claims, though minimal. (And at the same time that a Grand Canyon National Park was being legislated, which would both allow for and make more difficult water and power projects.) Order and priority were imposed in the 1920's by Congress. Out of that effort grew the Bureau of Reclamation, becoming the dominant dreamer in the 1930's and 40's. Fully fledged, its vision took flight in a combination of an upper Grand Canyon dam, diverting the river through a tunnel under the Kaibab Plateau, to flow through a power plant at Kanab Creek, down into the reservoir of a second dam, just upstream from the maximum reach of  Hoover dam's impoundment, itself silting in the Canyon's final 40 miles. This launch of a dam proposal crashed over California's opposition to Arizona's water demands, which forced a decade-long delay. Re-furbished in the early 1960's, the Grand Canyon dams became fatally entangled in a West-wide scheme, a cynic's dream of the dangers of extended over-reach. This second crash did leave vapors of claim and hope among a few, dissipating in the 1970's, and now perhaps hardly to be recalled.
Yet the dreams had magnitude. No surprise-- the Grand Canyon is itself outsize; our satellite photographs only emphasize its scale. And Marinaris me no valles, Mariana me no trenches--such monsters are playthings for machines. The Grand Canyon is OUR grand adventure. And when we fight over it, we often push it into the arena that is our political center stage, for as we repeatedly do and will, we carry the struggle to the top, to Congress, the only theatre where the actors can have a hope of disposition. Consider:
Congress created the Federal Power Commission (FPC) in 1920 to, among others, adjudicate who would build power dams on the Colorado. Congress pre-empted the FPC and other contenders by creating the Boulder Canyon Project for California's water and power needs. After World War II, Congress first considered a Grand Canyon dam, then set the whole question aside and authorized a dam in Glen Canyon. Faced again by plans for GC dams, it refused them from a mixture of changed attitudes, local concerns, and reordered national priorities. Along the way, whenever some non-Congressional claimant made waves, Congress shooed it away. And finally, through the Grand Canyon National Park Enlargement Act of 1975, it said, "Enough."
That capsule history is only one of many histories that pound in the lesson: Its never over until the fattest lady sings, and whatever politically incorrect thing that phrase originally meant, for Grand Canyon affairs, Congress calls the tune.
Read more »
Posted by jeff ingram at 4/30/2010 10:05:00 PM No comments:

The 1960's were a decade of ferment and change, certainly for conservationists, as environmentalists were called then. They were also a decade which was supposed to see the fruition of over half a century's exploration and planning into realizing dreams of taming and harnessing the water and power potential of the Colorado River. Dreams, yes, for that is what engineers (or their masters) make before they measure and calculate, estimate and delineate. Just as protecting the Canyon and presenting it to the public are acts of imagination by us softie tree-huggers and rock-kissers, so all those numbers and blueprints are preceded by different imaginations looking at the river and its canyons and seeing them emblazoned with dams, trapped into reservoirs, embraced and transported by powerlines.
At a meeting of reclamationists I attended during the GC dam fight, I sat at lunch with some Bureau of Reclamation officials, engineers all. We were being polite and jocular, but what sticks in my mind is the rhapsodic comparison one made between the beauties and cleanliness of hydropower with the clunky filth of coal-fired electric plants. Having attended MIT, I already suspected engineers of being human like the rest of us, but that lunch in Las Vegas sealed for me the conviction that at bottom they were also romantics. Dreamers.
Here are a couple of samples. The first comes from a Bureau of Reclamation (Burec) schematic of the Colorado and its tributaries, a 1945 fantasy of one way the entire river could be utilized: 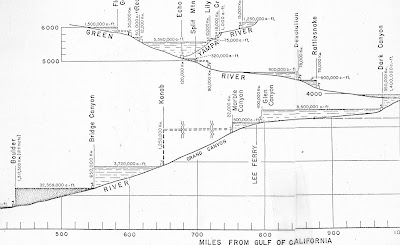 Upstream from the already existing Boulder/Hoover reservoir is the Grand Canyon. The first step was Bridge Canyon dam, with a capacity reaching half that of Hoover's yet needing only a tenth the storage. Then the crown jewel, the Kanab diversion, a tunnel under the Kaibab Plateau, almost the equal of Hoover in capacity, using only tiny Marble Canyon dam's storage of half a million acre-feet (maf). We will see this dream advanced, studied, argued for, and thwarted a number of times.It is a tribute to frustraton; Had there been no National Park, they would have been able just to add a couple more dams on the mainstream. But, oh! what a splendid creation, the mile deep tunnel carrying all that power potential to burst out into Kanab Creek, and run into Bridge's reservoir to be used again. Together 2 million kilowatts! How could they not salivate; wet dreams indeed.
Its worth noting too Glen Canyon & Dark Canyon; Rattlesnake and Desolation; Echo Park and Split Monument. Those built show us the destructiveness of "clean" hydropower; those not built are a tribute to those who triumphed in the political arena over the forces of conventional wisdom, a tribute to the ability to dream of alternatives.
The second rendering is of Bridge Canyon dam and a bit of its reservoir (complete with removed rock above, and already some tourists planes droning away, though few boats). Slasher movies can evoke no more fright than this industrial horror: 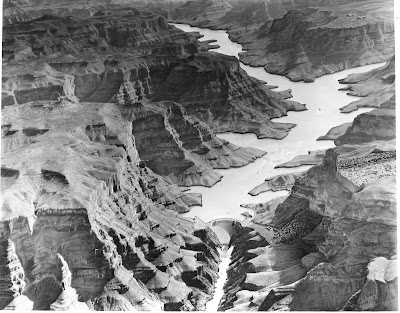 We reached a pause-point in our exploration of the political history of the Canyon's National Park with the 1919 legislative enactment. There is much more to come: The 1920's effort to improve the boundaries, especially on the Kaibab; the second Monument and its diminishment in the 1930's; scattered ideas about further changes in the 1950's; the new concepts for a Park in the 1960's and the third Monument, in Marble Canyon; the 1970's legislative Enlargement (sic) of Park and Havasupai Reservation, followed by mandated studies of Park-appropriateness; Kanab Creek Wilderness, 1984; the fourth Monument, Grand Canyon - Parashant at the close of the XXth century.


When we return to these stories, much will reinforce a basic theme of congressional action on the Park: protection and expansion of commercial interests. Grazing and mining figured large in the Hayden management of the first GCNP legislation. They will continue to do so. But, they scurry about in in the shade cast by the Godzilla of all interests, the desire to construct hydropower works to utilize all of the energy potential of the water that falls over 2000 feet through the Grand Canyon. Well, falls. Not quite: digs, abrades, polishes, bashes, transports; there are lots of things the river did up until we began over a century ago to, as the cigar-chomping big-bellied fellas say, tame it.


There are a number of histories concerned with the Colorado's water politics, river exploitation, and dam-building and its aftermath. I am not positive I have much of my own to add, at least until we get to the 1962-8 period of the massive effort -- and its thwarting-- to get Grand Canyon dams authorized. I do not want to repeat what is available elsewhere, but I do want to chew over the Canyon's experience of the story, if only for my own edification of just what those guys thought they were doing. Again, I spent a lot of time in the archives, particularly of the Bureau of Reclamation, always the prime movers for dams, but also the Federal Power Commission, the Arizona Power Authority, the Los Angeles Dep't of Water and Power, -- i.e, BuRec, FPC, APA, and LADWP -- and hardly least, the Hualapai. With so many, and there are others, sources, there will be much going back and forth rather than a neat chronology  The story covers about a human lifespan from the beginning of the XXth-century through the 1970's, when the dam dream seemed to become only a ghost, another discord from that too-tragic period, wisps of its over-blown claims still echoing faintly.
Posted by jeff ingram at 4/04/2010 12:14:00 PM No comments:

Eight of the maps need to have all or some part of  "Grand Canyon National Park" text added in Garamond. The problem is that the maps as received are skewed, so any text I add is at an angle to east-west and to other text, township lines, etc. If I correct the tilt and add the text, the size of the file increases substantially.

Here is D Whitis' explanation for the skew:


"Mapping reduces the curved surface of the earth to a flat surface
representation. The UTM grid system of coordinates is most commonly used for digital mapping purposes. The UTM system breaks the surface of the earth
into many grid zones. Each grid zone "touches" the earth in the middle of
the zone. Grid north and true north don't align at all locations within the grid zone. Topo maps cover 7.5' of arc both N-S and E-W, and the longitudinal lines converge towards the poles (the top of the maps are narrower than the bottoms).  Grid coordinates do not converge - they are square. The topo maps that fall towards the east and west edges of the grid zone must therefore be rotated most to align correctly with each other.
The DRG (digital raster graphics) map images are rotated to orient them
correctly to grid north so that when they are imported into mapping software
at the correct grid coordinates and scaling factor, which is specified in
the original files' metadata, they lap together seamlessly. For what it's
worth, the west end of the Grand Canyon is at the far western edge of UTM
zone 12S, hence the more severe rotation. The earth's surface is projected vertically onto the surface. The map represents the earth spheroid very accurately at the center of the zone, but there is some distortion near the edges."
I have yet to resolve this if I want to end up with a set of printable maps.
Posted by jeff ingram at 4/04/2010 10:31:00 AM No comments: