Looking over the years 1966-72, I cannot help being amazed at how little was settled. Grand Canyon issues are always contentious; always those with different positions are willing to argue hard, and if they lose in one forum, appeal to another, which is why Congress has so often been the arbiter, and Arizona federal legislators key protagonists.

And why should the battle be short or truncated? Perseverance in the face of hostility is too often rewarded in our political system for anybody to give up. For instance, the Havasupai's land repatriation effort took almost a century. The motorboaters were behind for a decade, then gained a victory, and if they ever lose their political advantage, will have to confront a Wilderness river. Opposition to the Grand Canyon dams was so limited as to be a mere gesture for 40 years, and then in a decade, the dam dreams evaporated. Grazing has been a major shaper of Grand Canyon landscapes, physical and political, since the Civil War, and while today it hangs on here and there, it is barely anything but a tax dodge or a faint whoopee for the good old days.
Read more »
Posted by jeff ingram at 5/27/2012 03:12:00 PM No comments:

With a new Congress, Goldwater and Udall told NPS on 26 Feb 1971 to go ahead and draft a Grand Canyon National Park bill. Goldwater asked for information on mining, hunting, logging, and private lands. He especially requested details on grazing permittees.

NPS was already looking at some new proposals:
1. Adding even more of Havasu-Cataract canyon;
2. Increasing the size of the Coconino addition on the south rim (which resulted in a larger rectangle drawn on maps, even though the acreage stayed at 640);
3. Making the Kanab addition bigger;
4. Considering several options for the western extension. One went down to Separation Canyon. NPS thought this was logical because of the outstanding scenic & geologic values, and because the  free flowing river ended there. Such an extension would eliminate the possibility of a dam. A shorter extension, only down to Diamond Creek, would include an important take-out location for river trips, but would leave the damsite out of the Park. If the extension were even less generous, going only to Whitmore Canyon, a major river take-out would still be included, and Lava Falls, a major geologic feature, would be protected from helicopters ferrying river passengers.
Read more »
Posted by jeff ingram at 5/18/2012 02:01:00 PM No comments:

As recounted previously, GCNP was working on its Master Plan in late 1969, including holding public meetings. The Plan naturally tried to deal with boundary changes, and this map  (113 20,000 Nov 1969, San Francisco Service Center) might be seen as a snapshot of NPS thinking. First, the east side: 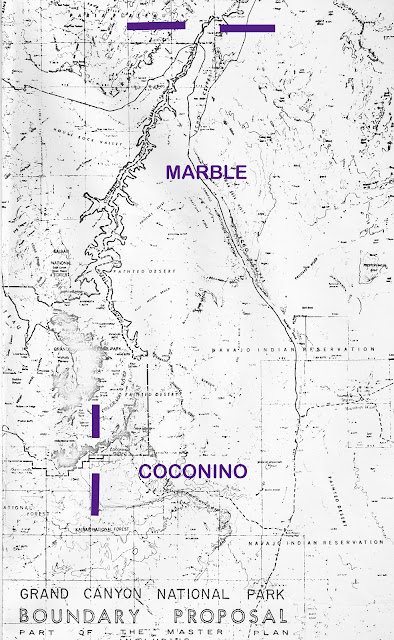 The addition of Marble Canyon still runs on both sides from the Little Colorado up to Lees Ferry, but there is no one-mile buffer or easement above the rims.
Then there is the troublesome little Coconino addition, the perplexities of which I tried to deal with in the entry of 10 Sep 2010. In this nutty-shell-game, NPS started out in the 1950's wanting two half sections added along its East Rim road alignment, 640 acres--see the smaller rectangle between the lower purple bars. However, once the road was built (the Park could not wait for legislative action), the need for this addition lessened. Strangely, instead of forgetting the addition, this Master Plan proposal seems to extend it to three full sections--note the faint rectangle around the small one--about 1920 acres. Indeed, looking back at the map prepared for Senator Goldwater (entry of 11 May 2012), the addition shown is this larger version. Here, for a more detailed understanding of this miniscule detail is a piece of the current Kaibab National Forest map:

The green is the Forest, the Park is tan, and a bit of Navajo land on the right is yellow. The sections we are concerned with are the three below and to the left of the CO in the upper COCONINO: you can see the 7, 8, and 9 section numbers (5E 30N). The original idea was to add the north half-sections of 7 & 8 -- you can see how close 7 comes to the road -- the 640 acres. On the Goldwater & Master Plan maps, the full three sections are indicated. And not to give anything away, this current map shows the three half-sections that ended up in the Park in 1975. Was any of this a thought-out NPS idea? Or was it all due to the difficulties of representing such small details on what are, after all, pretty large-scale maps?
Read more »
Posted by jeff ingram at 5/15/2012 05:48:00 PM No comments:

A quick look at before and after Jan 1969 indicates a shift in the political scene for GCNPark legislation. The dam threat was gone; many of the players were gone. The use of Park legislation to make points about the dam faded; the question of what really belonged in the Park could become uppermost.
One of the biggest differences was the person and staff of Arizona's Senator Barry M. Goldwater (BMG, often): He had been a figurehead player in the water fight; his senior colleague Carl Hayden was the chief, and was now gone. (Hayden had been, of course, a key player in previous Park changes, mostly as a protector of local, exploiter, interests. BMG could thus, perhaps, now operate more freely.) And unlike any of the previous congressional players, Goldwater had a long-standing personal interest and experience in the Grand Canyon. He had been through the Canyon on the river, and for him, the Canyon was a personal cause. Of course, he was an Arizonan first, and had defended the dams before 1969. Now, he was free of that pressure. Anyway, in 1969, he was able to step out, to be the principal mover of Grand Canyon legislation, certainly in the Senate.
Read more »
Posted by jeff ingram at 5/11/2012 03:58:00 PM No comments: