NEWS FLASH (40 years old, however). GCNP Boundary E: Havasupai: A Fourth Part To The Mystery Of The Beaver Falls Crossing

In my post of 10 Jun 2014 GCNP BOUNDARY E: HAVASUPAI (ADDITIONAL INFORMATION); BEAVER FALLS MYSTERY, IN 3 PARTS", I traced the current situation where the Havasupai have laid claim to Havasu Creek below Beaver Falls, a claim that appears on all maps I have found so far.

However, in my recounting of the legislative history of PL 93-620, I uncovered (well, re-covered) the information contained in the Report of the House Interior Committee on S.1296, that the boundary of the Reservation, as described on the official map, is explicated this way:

"Such map, which shall delineate a boundary line generally one-fourth of a mile from the rim of the outer gorge of the Grand Canyon of the Colorado River and shall traverse Havasu Creek from a point on the rim at Yumtheska Point to Beaver Falls to a point on the rim at Ukwalla Point…" (my emphasis); the map having been named earlier in the Act as 113-20,021B, dated December, 1974.
AND in its Section-by-Section Analysis, the Report on page 11 reads:
"All of the lands to be transferred by section 10 are outside the perimeters of the main stem of the Grand Canyon; however, the boundary crosses one major tributary canyon at Beaver Falls. It is the intention of the Committee that in establishing the precise boundary for the park at this point that the Secretary should cross UPSTREAM from the falls in order to assure their protection as a part of the park." (my emphases throughout).

Therefore, the full House, in accepting the Havasupai land grant amendment in Section 10, without any discussion of the boundary, implicitly accepted the interpretation of the Committee of the upstream crossing of Beaver Falls.

The story I am telling of PL 93-620 has now progressed to the Senate-House Conference, which took up the differences between what the two houses had passed, debated them, and fashioned the legislation in its final form, as I tell elsewhere. That Conference produced its own report. It is dated 17 Dec 1974, and was taken up and agreed to by the House on the 18th. Here is the relevant section of the "Joint Statement of the Committee of Conference" on page 6 under "(3) Havasupai Reservation Enlargement":

"The House amendment included a provision for an immediate enlargement of the reservation and specified that the boundaries would be located on the plateau one-quarter of a mile from the rim of the canyon except where it crosses Havasu Creek from Yumatheska (sic) Point to the top of Beaver Falls to Ukwalla Point; thus granting trust title to approximately 185,000 acres of national park, monument and forest land to the Havasupai Tribe." (my emphasis)

It is significant that the Conference did make some modifications to Section 10 but the boundary was not the subject of discussion. It thus was accepted by both the House and Senate Managers and recommended to their respective bodies. That is, to belabor the point, first the House Committee, then the full House, then the Conference, then the House and Senate each considered and approved, with explicit statements in the two Reports, that Beaver Falls was to remain in the Park.

I would go so far as to say that those legislators of , oh, so long ago, insisted on, were adamant about, Beaver Falls staying in the Park. And even though we have all moved on and are more enlightened, pleasant, and of sweeter disposition than 40 years ago, the National Park Service administrators of Grand Canyon National Park ought now to obey the law and assert the Nation's ownership of Beaver Falls, doing whatever is necessary to assure public access, and at the same time, removing and preventing any vandalism to this land, that, even had it been under Havasupai supervision, the legislation said should be "forever wild".

PREFACE
I did think of some other titles:
Theft or Gift?
Possession is Nine Tenths of the Law ; But Where is the First Part?
Map Games: Who Gets to Draw the Line?
Ignored and Forgotten
The Buried & Lost Havasu Creek Crossing
Anyway, on with the story...

PART I: THE MYSTERY DEVELOPS, SLOWLY

Beaver Falls is not so much a singular drop as a cascade of travertine terraces, extending along a quarter mile of Havasu Creek. It is a landmark on the boundary between the Grand Canyon National Park and the Havasupai Indian Reservation.
Read more »
Posted by jeff ingram at 6/10/2014 09:00:00 AM 1 comment:

The House of Representatives met in the evening of October 10th (though the Congressional Record has it as legislative day 11 Oct) to consider "Further Protecting Outstanding Scenic, Natural, and Scientific Values of the Grand Canyon". That record ran from p. H10436 to p. H10451, 16 pages worth of the most public debate the legislation would receive in its two-year history.
The principals were, in order of speaking, Representatives: Pepper of Fla, Quillen of Tenn, & Gross of Iowa, on the rule to govern debate; then on the bill: Taylor of NC, chair of the Parks Subcommittee, Seiberling of Ohio, Steiger of Ariz, leading the Republicans, Yates of Ill, Hosmer of Calif, Rhodes of Ariz, Udall of Ariz, Foley of Wash, Dellenback of Ore, Ketchum of Calif, Meeds of Wash, Regula of Ohio, Skubitz of Kan, Dingell of Mich.
Of course, members of the House have the right to revise and add to their remarks in the Record so all that is printed is not necessarily exactly as spoken. Sadly I was not present, so can offer no personal views on the content & manner of the debate. Many members only came when it was time to vote, as indicated at points during debate.
In any case, following the main discussion, the bill as sent over by the Senate was read until Taylor moved the reading be dispensed with and the bill opened for amendments. Each was read, then agreed to, or debated and then voted on, all being voice votes except for the Havasupai transfer on which there was a roll call. The amending process completed, the House passed the amended bill by voice vote.
Read more »
Posted by jeff ingram at 6/08/2014 10:08:00 AM No comments:

McComb went back to DC to watch the debate. sending off a local letter to the editor, once again attacking the Havasupai transfer. This brought the tart response that he was "callous and exploitative". He and I, in Tucson, had theretofore been involved long distance in whatever conservationist anti-Havasupai lobbying effort had been mounted. I continued to rusticate, not called upon to help out in the final effort to beat down the Havasupai provisions.
Read more »
Posted by jeff ingram at 6/05/2014 08:07:00 AM No comments:

The long story of hunter-love for the Kaibab Plateau has its place here insofar as it contributes to knee-jerk opposition to anything that might possibly be construed as a threat to their freedom to hunt there -- and knee-jerk distaste for Grand Canyon National Park's (occupying the southern end of the Plateau) being closed to hunting. Before picking up the story in Aug 1974, it may be worthwhile to add some background.
Read more »
Posted by jeff ingram at 6/05/2014 08:05:00 AM No comments:

Given what great changes the Udall-crafted legislation had undergone from the bill the Senate had produced, future understanding of what the House Committee had finally approved and its justifications therefor would be heavily based on the 36-page Report document that Committee staff produced on 25 Sep 1974. In the floor debate, and later in conference with the Senate, what the Report said would both set the lines of discussion and provide markers should there be changes in conference--which would, of course, produce another report.

Here is the document's header: 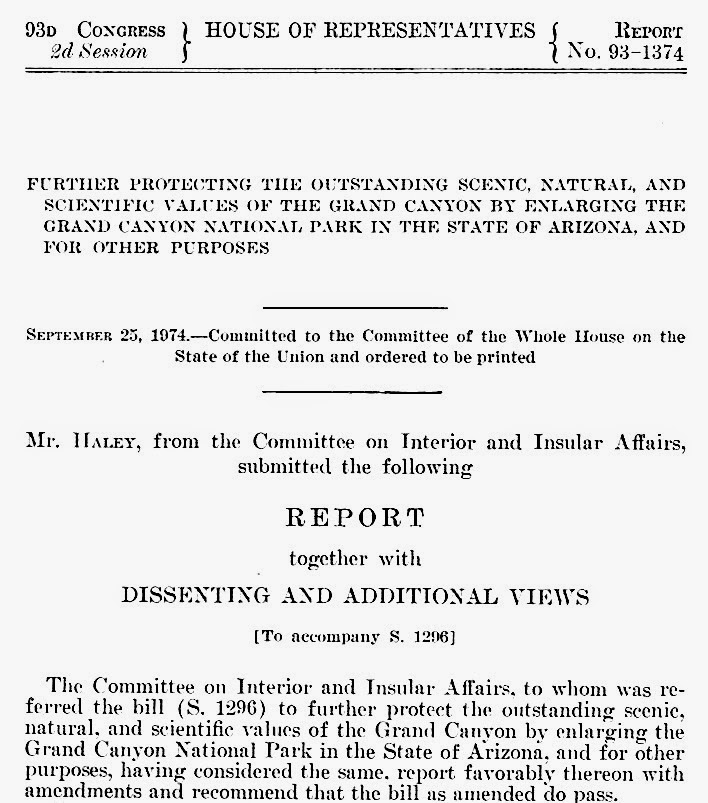 The text of the amendments followed, then a short statement of purpose. Much longer were the discussions of Background, Legislative History, and more important, the Section by Section Analysis. Following the Committee recommendations, reports were reprinted from Interior (submitted November 1973) and Agriculture (July 1973, plus an addendum from April 1974), and the President's statement recommending the Havasupai reservation enlargement (May 1974). A dissenting view on the Havasupai transfer was written by Reps. Foley, Seiberling & Dellenback, while Steiger and Idaho's Symms lamented the failure to approve a dam. The Report ended by printing changes in existing law.