Anticipating the hearings by a day, Senator Case introduced S. 2017 to "include all of the Grand Canyon, except for those parts that are included in Indian reservations, in the National Park". He remarked it was similar to bills he had introduced for "the past six years". His press release was included in the hearing record*, but not the text of the bill. The map (113-20011, May 1973, DSC) prepared for him by NPS, was included in the hearing record (p. 93) only as  submitted by McComb. Oddly, in fact, neither the Goldwater nor the NPS map is in that record. Note that the non-river boundary is set on section lines, though there is no legal description. Existing NPS areas added to the Park are white, while the cross-hatched "proposed additions" were to come from other agencies' turf. "Indian Land" marked by diagonal lines are areas section 13 of the bill encourages the Navajo, Havasupai & Hualapai to establish as tribal parks (as the Navajo had already done). 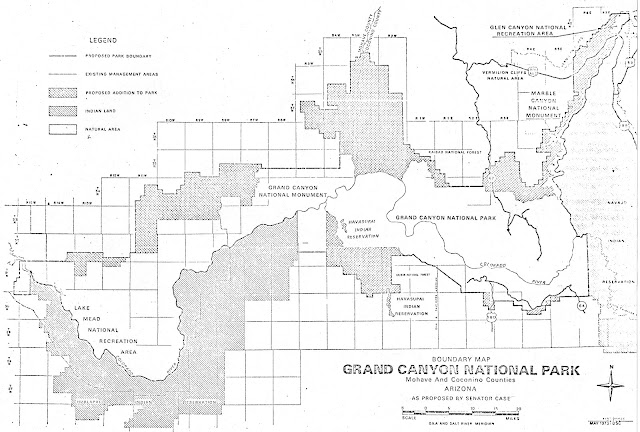 GCNP-Hualapai Boundary: Another note in the continuing series; this time from 1973

In my consideration of the dispute over this boundary, I wrote (Oct 2011) that in 1975 -- after the GCNP Enlargement Act became law -- then-superintendent Stitt started talking about the boundary being on the "historic high water line", and I, --along with the Hualapai and their attorney Marks -- was surprised and displeased because it was our understanding that putting the boundary on the south bank was only intended to give NPS jurisdiction over the water surface in order to control river traffic. Going up to a historic, maximum-ever high water mark would be taking Hualapai land, in a common-sense interpretation of the 1883 reservation establisment, which used "to" the river, and "along" the river.
Read more »
Posted by jeff ingram at 9/18/2012 04:48:00 PM No comments:

March 20 was the big day. I do not know whether Senator Goldwater actually went to the Senate floor, but the Congressional Record for the day published his 7-column statement and the text of the bill he introduced for himself and 24 others. This entry summarizes the bill language and Goldwater's explanation. (For comparison, my entry of 26 July 2012 contains the text of Act as passed two years later.) Since the proposed boundary was the centerpiece, here first is an NPS map (a little off in the top center) of his proposal: 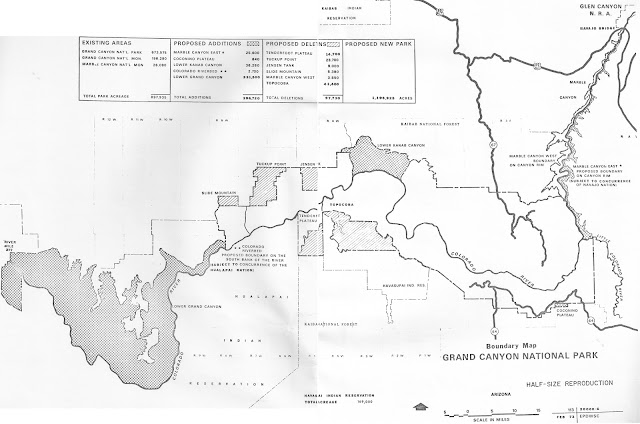 My journal has few entries for the three months between the bill introductions and Senate hearings on June 20. Hirst's account does not describe any action during this period by the Havasupai, either. NPS, however, having provided much of the foundation for the Goldwater bill, worked hard to settle the details of its own position.

So we had spent two months and been granted the reward of a Park boundary that would go to the Canyon's western end. Since it was almost all NPS land anyway, the final result would be a net loss of protected land since there were to be significant subtractions for what we considered to be the economic purposes of cattlemen, hunters, and the Havasupai. We had been consulted, however; therefore we were to be content. The trouble with that view was that we saw ourselves as the leaders for an expansion of the Park, working toward a presentation of the entire Canyon, an entity worthy of its status as a world-wide icon of the natural world. And what came out of the January 29th meeting was an undignified pastiche of you got some, you lost some. We wanted a Park that was taken another step toward an ultimate completion; Goldwater-Emerson was a settling of old accounts that would protect local interests: graziers, hunters, dam-dreamers. The Havasupai, of course, would have been the most pleased; for them, Goldwater-Emerson would reverse a 90-year-old injustice, bringing a repatriation of some of the land they had once lived upon without hindrance.

The alert observer might wonder if we should have "reconsidered our position", as Goldwater urged. No chance. McComb & I, along with so many other Americans, had already entrenched our "position" -- our belief in protecting the Canyon -- during the fierce, if thankfully short, climactic defense of the Canyon against the attempt by southwestern/Californian water interests to turn the Grand Canyon into an appendage of theirs producing electricity and dollars for future continued economic & population increase. Defending the National Park System and the Grand Canyon in its entirety was not a "position"; it was a bedrock principle, and we firmly believed that once pieces of that System were broken off for economic exploitation, it would be nibbled to irrelevancy and death. The Havasupai might have been cheated for 90 years, but to correct that wrong by sacrificing part of Grand Canyon National Park was itself wrong, and also unnecessary. Moreover, our sense of being right would only be strengthened the more we learned about Havasupai goals and actions.

January, from the time we sent out our draft proposals to the meeting on the 29th at Goldwater's house, was filled with conversations as we tried to ascertain the position of other interested parties. We had spent December taking soundings, and then produced a proposal that we felt comfortable trying to convince others to accept as center-seeking. We would try to discuss it with anyone who was interested. We also continued to collect data on hunting, grazing, logging, Havasupai uses, etc., learning as we did so the difficulties lying in the details. With everybody aware of what might be done, at the actual meeting there could be discussion and maybe agreement on the items that would constitute a bill with wide support, or at least acquiescence. This narrative of publishing a proposal, followed by wide-spread discussion in order to reach for an agreeable bill, seemed like a workable scenario. We actually thought we were proceeding under Goldwater's aegis, in order to avoid the head-on conflict that Senator Jackson had told him was undesirable.
Read more »
Posted by jeff ingram at 9/02/2012 09:04:00 AM No comments: