The Parks Subcommittee staff now came center stage to prepare for the mark-up session that would consider and dispose of amendments. Lee McIlvain, majority counsel, advised that the likely date was mid-March. (Of course, our information on hearing dates in 1973 had been drastically off, and we still had to prepare.) There was a choice: consider the original bill as introduced, or take up the Senate-passed bill as a base and amend it -- or as we saw it, upgrade the provisions so that the law would be worthy of the place it was to celebrate. Aside from the official map produced by NPS, there were several other changes we were discussing. And then, of course, there was the possibility of hostile action by, for instance, the dam proponents.
Read more »
Posted by jeff ingram at 5/31/2013 05:52:00 PM No comments:

One way that we thought more of the Grand Canyon might be designated appropriately was to recognize the quality & Park-worthiness of the Navajo, Havasupai, and Hualapai lands -- though of course at that moment in 1973 we were only thinking of the Havsupai Reservation as it existed. So at the time of the House hearings, I produced this festive suggestion to represent our ideas, the red being the entity created had the additions been made which Park advocates testified for. The Navajo green shows their tribal parks. The Hualapai had no such designation; what I drew is just my ideal. 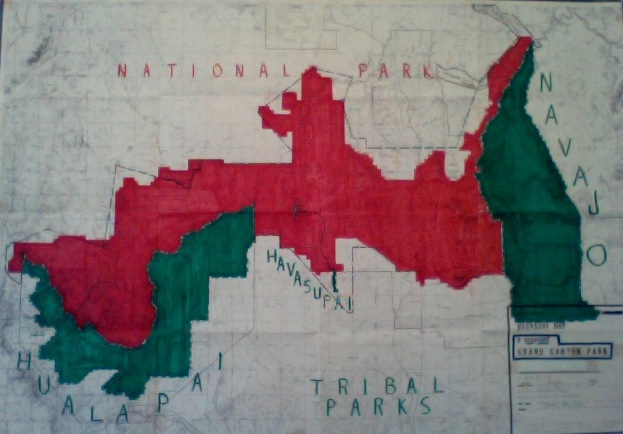 To start the new year, I felt the need to write McComb's boss, Club Executive Director McCloskey, about my strong hopes for satisfying action on the Grand Canyon, due in large part to "John's efforts & expertise", and "your own solid backing … substantial financial aid from the Club as well as psychological backing in what has not always been a pleasant campaign." His reply was gracious to me, but most important expressed his "strongest confidence in John's judgement on (the Havasupai) matter."

For us, McComb & I, Udall & his aides, the main consideration in the House remained how to adjust the proposed Park boundary on the Canyon's north side to better approximate the idea of a "complete" Park, something we reaffirmed as Congress convened in January when Udall aide Dale Pontius told me on the 16th he was waiting for Udall to return and for NPS to send a revised map. We would need to check it for grazing impact. The Wilderness study provision seemed ok, but not a ban on aircraft impact. He himself planned to visit Arizona in a couple of weeks. We discussed the idea of authorizing a purchase of private land for the Havasupai, and noted that Hualapai lobbyists were around. Out here, Udall had told McComb he was interested in going on a trip in February, maybe with others involved. McComb resolved to go to Washington. However, a Udall visit fizzled, and Pontius reaffirmed he was coming at the beginning of February.
Read more »
Posted by jeff ingram at 5/22/2013 06:30:00 PM No comments: