Out west: NPS debate continues in the 1946 "Survey"

Olcott's report was only one offering in the debate over the place in the National Park System value hierarchy of recreation, where, as in the western Grand Canyon, the conservation values of the 1916 NPS organic act were strong but for one reason or another, not predominant. Which brings us to A Survey of the Recreational Resources of the Colorado River Basin, an NPS project authorized by Reclamation and the Secretary in 1940-1, carried out through the World War II years with especially the help of Frederick Law Olmsted, "compiled" June 1946, with the book form (242 pp, 15 separate maps) dated 1950. Only an expert in all the ins and outs of internal NPS goings-on could fully tease out why the Survey took the form and expressed the attitudes it did. Wanting to be comprehensive, it ought to be one of those seminal kinds of documents, but it may, for the student capable of the broadest view of NPS, be less than that. It may never have settled any debates or shaped any major policies.

For my purposes here, the Survey appears as a kind of butterfly flitting over the landscape and the issues, but in the end I have to turn back to the details to be excavated from the more mundane archives. It would seem that the Olcott report findings, as one example, would show up in the Survey, but that is rarely obvious. Maybe just too many layers of bureaucratic review had done their obscuring work. Nevertheless, a summary of how the Survey touched on the Canyon seems worth a few lines, always keeping in mind that the Survey was given life in response to Reclamation proposals.
Read more »
Posted by jeff ingram at 4/28/2011 08:20:00 PM No comments:

Its always more fun to get out on the land, as NPS planner Olcott did in autumn 1942, along with an archeologist and the Chief Ranger for Boulder Dam NRA, surveying for two weeks the recreational resources of the "Bridge Canyon Reservoir Region" north of the river, and from the GCNM2 down to "Pierce" (Pierces? Pearce?) Ferry. The roads were then, as now, unpaved, though unlike now, there was a Wolf Hole store, and residents in Mount Trumbull settlement, though only Chet Bundy is mentioned. The NPSmen used a pick-up, and had to resupply at St. George a couple of times. With the help of the ever-useful "Indian Country" map (a 1970's edition) of the Auto Club of Southern California, here is a rough sketch of their routes: 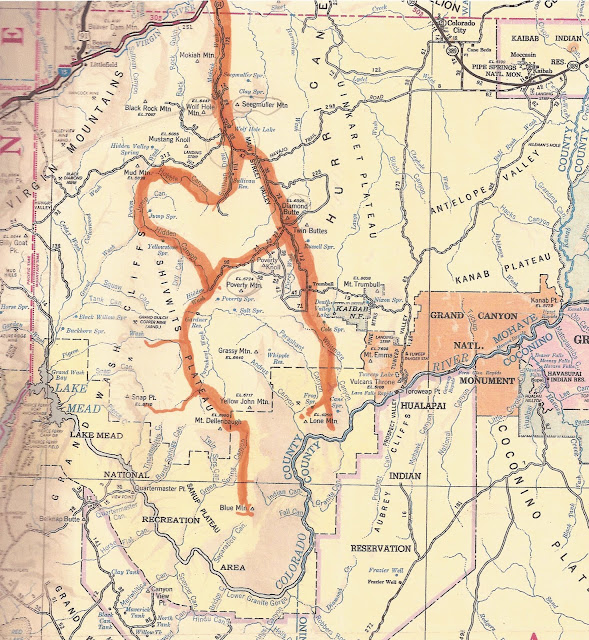 They proceeded east to west, the first expedition down Whitmore Wash, then out onto the main Shivwits, and the third in the northern Grand Wash Cliffs. A journey over their routes today would find only minor differences.
Read more »
Posted by jeff ingram at 4/27/2011 12:09:00 PM No comments:

In the West: What is NPS to do?

Looking back over 130 years, it is tempting to conceive of the expansion of the Grand Canyon National Park's boundary as a logical, step-after-step, if not always steady, gathering of federal lands into a unified entity celebrating the physical Grand Canyon. This is certainly not how that expansion was seen at the time. In mid-twentieth-century, this was due to the also-increasing federal commitment to dam construction, first with the Boulder Project and then at Bridge Canyon. The presence of dams and reservoirs was, theoretically, a heavy tabu for a National Park. Yet the western Canyon was certainly of the highest quality. Consequently, even as NPS was exploring, then implementing, the (lesser) alternative of reservoir recreation complexes, some of the investigators were learning about and praising what was after all the further expression of the Canyon's full story. To say that upper Lake Mead or a Bridge Canyon dam reservoir would be a huge recreational asset was also to point out the Grandness of the Canyon west of the then-Monument, GCNM2.
Read more »
Posted by jeff ingram at 4/25/2011 07:21:00 PM No comments:

I have come across the 1930 map that the Bureau of Reclamation produced in connection with its plans for Hoover (and Bridge Canyon) dam. 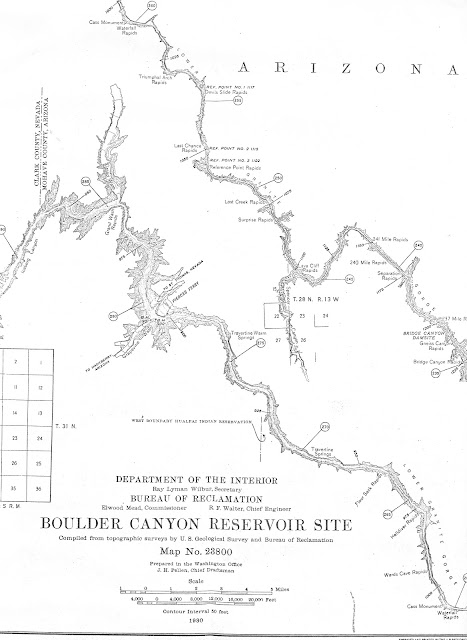 Since my copy is a very old Xeroxing of the original, it is not great on detail, but I wanted to look for changes that might show between this map and more current versions, so I PSEated it a bit in the section from the western end of the Canyon and Pearce Ferry (note the old version: Pierces): 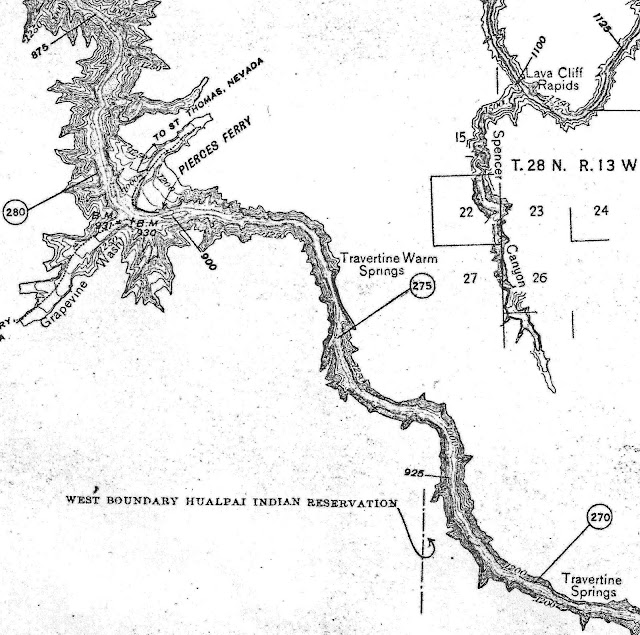