Time out from history for a bit of speculation.

Friends of the Havasupai have often castigated whitefolk,-- their actions, aggression, and agencies-- for first banishing them to a small plot in a side canyon of the Grand Canyon, and then thwarting them for almost a century in regaining possession of only a small fraction of the land they used to occupy that runs from the Hualapai lands past Moenkopi and over toward the Hopi villages, as well as from the Canyon down south to the great east-west corridor that famed US 66 ran through.

In prospect, however, if not in fact, the Havasupai story, left to itself without whitefolk intervention and "protection", might well have been an even sadder episode of the XXth century. Consider:

Near-contemporaneously with the arrival and explorations of the Spaniards from the south, and their establishment along the Rio Grande, the Dine' -- the name "Navajo", "Navaho" is in much wider use-- were moving into the American southwest -- northern New Mexico, eastern Arizona, and lands bordering these areas. Early adopters of the ungulates, the Navajo were mobile and aggressive, riding their horses and bringing their sheep from the 1500's on such that by the 1700's, they were well-established near and surrounding the Hopi villages, coming up against the "Grand Canyon front".
Read more »
Posted by jeff ingram at 2/26/2013 10:28:00 PM No comments:

To ease into the turbulence of this dispute, here is some background.
First, photos taken at the time that I found in my files. Martin Litton flew over and provided two views of the village of Supai, here showing its setting along the bottom of Havasu Canyon, cut into the Esplanade, itself one of the sweeping features of this part of the Grand Canyon; the upper rim is off toward the clouds. 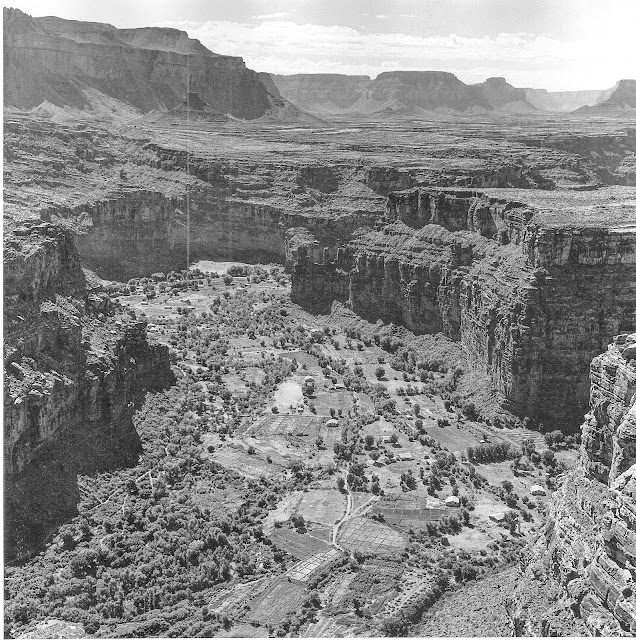 Next, a view directly down over houses and fields: 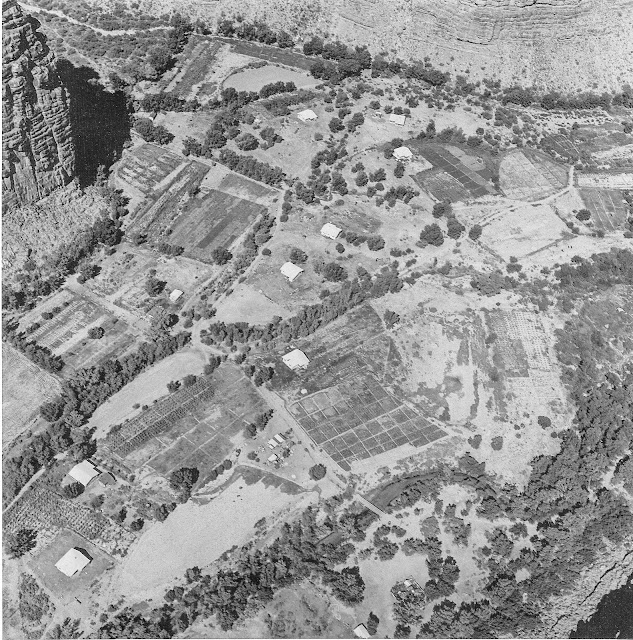 Telling the story of Public Law 93-620 so far, through 1973 to the start of 1974, has been seemingly spinning out a single more-or-less coherent narrative thread. And truly, it would be possible to maintain this thread all the way through the final act of Presidential approval in January 1975. The legislation was conceived of and pushed as creating a Park more descriptive of the extent of the Canyon itself, although the range of opinion on the most accurate description was not just wide, but had been evolving over several years; well, over the decades, in truth.
This Park-centered narrative did continue through 1974, brought to a mangled conclusion in the final events. That narrative, responding throughout to our determination to "complete" the Park --and the push back by those who disagreed with us--, does have, as I say, its own coherence; it is a stand-alone story.

It is an ironic, to-be-remarked-upon, coincidence, though coincidence it is, that the history of the Canyon's Park began in the early 1880's, at the same historical moment that that other whitefolk creation, an Indian Reservation for the Havasupai, was brought into being and American history. Others, and I, have related the history of the increasing entanglement  of that Reservation and that Park, a history that makes clear why, on the one hand, legislation to enlarge a Park was necessarily also legislation to enlarge an Indian Reservation, and on the other, why the fight over the latter was so full of anger and seemingly irreconcilable positions.
Which, I have to remark, is only to be expected in our advocacy-organized, invective-inviting, political system.
Read more »
Posted by jeff ingram at 2/17/2013 05:46:00 PM 1 comment:

After the hearing, with our back-home group intact, we visited with Udall, speaking both as Canyon advocates and constituents. His first tack was that we should consult with his principal aide Bracy. Knowing already how Bracy reacted to our desire to make the bill more Canyon-friendly, McComb objected on the ground that Bracy was too political, which Udall correctly interpreted as meaning we thought Bracy was overprotective of Udall. His value was to indicate problems; Udall would then make decisions on what course to take. So we should be giving him options, and he could choose what to offer and what someone else may have to handle. Rodack assured him we would push our large park ideas, and Udall went so far as to offer this course: after discussion with Bracy he would talk to friendly Representatives like Ruppe, Mink, Seiberling, Kastenmeier, O'Hara, Dellenback. Then he would be in Tucson for the holidays. He offered the thoughts that Goldwater would not run again and that Steiger was erratic.

We visited Steiger, and listened to the strong moral, human-value case he made for the Havasupai claims. The Forest Service was an obstacle, he opined, but would be run down by the Goldwater "train". And even though he had heard from cattlemen, and would be alone in the committee, he was going to be tough fighting for the Havasupai, and thought we would lose politically. He was clear that the Park was the obstacle. The land would be protected if repatriated to the Havasupai; there would not be any "hot dog stands". McComb suggested it was a matter of management, but Steiger scoffed at the notion that we would jeopardize the bill because of the Havasupai issue.

After some had made their planes, others of us spent the next day visiting committee members' offices. Representative Tom Foley remained a steady opponent of repatriating the lands to the Havasupai. There were 13 other visits, some perfunctory hellos, others with sharp questions. We found good friends, and also more who were anti-transfer. In only a couple of offices did we get to talk only to an aide. Overall, the Havasupai were the principal issue, and that was true in our talks with committee staff as well.

Though relating them will not complicate this story, administrative matters did take up NPS and our time, primarily the river management issue, with meetings continuing. Master planning and Village development work were also on-going, and there was continuing pressure from the Tusayan development south of the Park to get access to water from the Park, which neither the state nor NPS were willing to allow. The Grand Canyon's political landscape is always a busy place.
Read more »
Posted by jeff ingram at 2/17/2013 05:44:00 PM No comments: