Coming so late in the Hoover presidency, GCNM2 designation might look like a last-minute grand gesture. However, NPS and others had been working on Toroweap and GCNP extension west for five years. So although it might have come as a surprise to those not involved in the planning, it seems in retrospect a well-considered NPS project. That it was coincident with a paradigm shift in American politics and government certainly added uncertainty. President Roosevelt's Secretary of the Interior, Harold Ickes, was a new, and would become a monumental, force himself, but the complainants about the Monument came from the usual sources.
A week after the proclamation, Dec 30, 1932, NPS sent letters announcing it to Arizona Senators Hayden and Ashurst, "sure they will be interested", and only mentioning Toroweap and auto access to it. Given the thousands of acres of Kanab Plateau taken in, this was disingenuous at best. However, Hayden had already been awakened. On the day before, he had sent NPS a letter from WAKent who, a couple of days before the draft went to the President, wrote Hayden on behalf of the people of Tuweep, saying it was a very fertile valley with prospects of a town, and should be open to homesteading. It was an injustice for NPS to set aside such a vast public entry so useless for park purposes. The withdrawal should be lifted, to a line down to two miles from the Grand Canyon. Kent had already indicated he thought park values were worthy ones. So what I think he was writing about was the 1930 withdrawal, and just happened to coincide with the proclamation, which anyway did not meet his criterion of being within two miles of the Canyon.
The National Parks Association wrote with congratulations, and an NPS press release celebrated the view, the huge cinder cone, and the area's remoteness [perhaps not what the pioneers of Tuweep wanted to cheer about] -- and was off on the acreage by 8% or so.
Read more »
Posted by jeff ingram at 1/24/2011 05:18:00 PM No comments:

GCNP: A Mystery; An Agenda

Although we are not quite at the mid-point of this Grand Canyon National Park story, we are about to get into another one of those wrangles where Park values can seem subordinate-- always a bit depressing. Yet somehow, by some conjuration over the decades, we seem to find a kind of progress. To keep my spirits up, then, let me take a break for a reminder of the path so far traveled.

We started here, with the shaded rectangle being the 1882 Powell-Harrison proposal: 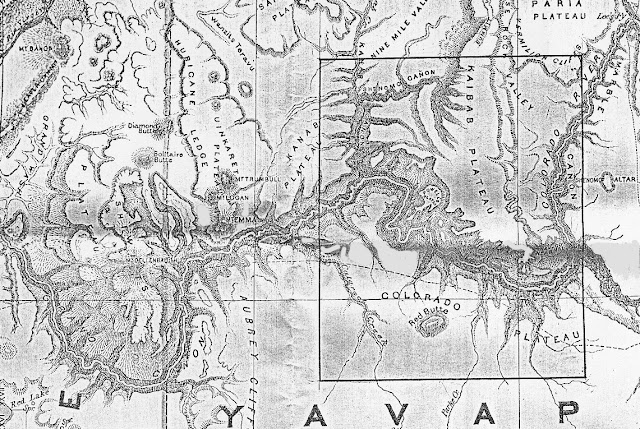 We then went down to here, with the congressionally approved Park of 1919: 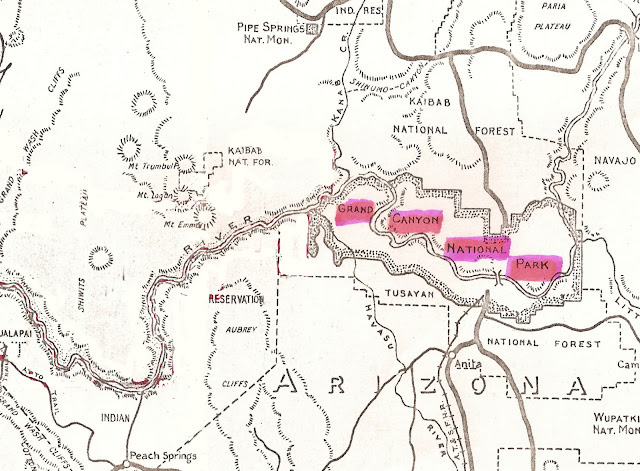 A Utah governor, a Zion NP superintendent, an aide to the Interior Secretary, all had stirred the interest that led to the April 1930 withdrawal for study of the western Grand Canyon and downstream reservoir region. Yet it was two more years, May 1932, before an official NPS investigatory trip was organized by Sup't Patraw of Zion, with Toll leading the study. Sup't Tillotson of GCNP was included, and a former congressman, L Cramton, now an attorney for the Secretary. The Bureau of Public Roads sent a representative. Toll wrote the main report, June 1932, and Cramton supplemented it with his own perspective as erstwhile chairman of the House committee on Interior appropriations.
"Without question", Toll writes, "it (the Grand Canyon) is all of national park quality." The only question was the park's desirable size. Toroweap was unequalled as a desirable addition to the Park. Vulcan's Throne was desirable. There was little information on the townships on the south side of the river, but they are at least as valuable for a park as for anything else. Monument designation could be a temporary expedient before adding to GCNP. The lower part of the Canyon is stupendous, but not as extraordiinary as the current Park. Though suitable for a Park addition, it would not be necessary. Most of it was not readily accessible, and it would be expensive to make it so. [That NPS was not a wilderness-oriented agency.] If added, the area would receive but little development or travel for several decades. And even more dubious if Arizona opposed. The eastern part of the withdrawal should be added to the Park, but not made a separate Monument.  If administrative reasons should develop to connect these lands on the east to the current Park, which are now separated by N.Forest lands, [speaking of Kanab and Havasu] probably the Forest Service would see the need and give them up, since below the rim, there is little use for grazing or other commercial purposes. Finally, there should be no Park or Monument along the Boulder reservoir.
Read more »
Posted by jeff ingram at 1/14/2011 02:37:00 PM No comments:

The struggles over Grand Canyon National Park boundaries in the 1920's were more dispiriting than uplifting. However, some of that effort was grounded in the real experiences of NPS managing a real Park. And those real experiences generated among Park staff a sense of excitement about the lands they administered and a growing knowledge about other appropriate and appropriatable sections of the Grand Canyon.

When the Salt Lake Tribune ran an article about the Toroweap region in March 1927, it described how spectacular it was, how hard to reach, and how it could be a winter-time tourist destination when the Kaibab was snowed in. There were herds of wild horses, and a route down to the Colorado. The article was based on a visit by Utah's Governor Dern and party. They were enthusiastic, and stopping in Zion NP, infected Sup't Scoyen, who earlier had been chief ranger at GCNP. Dern saw this "most magnificent part of the Great Gorge" as a point in Utah's chain (though it was in Arizona) of scenic attractions. The cinder cone, Vulcan's Throne, was his reference point for suggesting an area about 3x5 miles on the north  be set aside. He wanted to protect such a desirable area from private exploitation, which might make it harder for Utahans to benefit. So in May, he asked the General Land Office to withdraw Toroweap Valley. A federal law did allow local folk to petition for recreational lands to be set aside. GLO referred the idea to Mather, who asked GCNP Sup't Tillotson if there was any information. He also queried the USGS' Darton, who replied in June that the area of great scenic interest was lower Toroweap, leading to a 3000' sheer wall down to the river. Vulcan's had an especially good view of recent volcanic outbursts, with lava cascaded over the edges. He also mentioned Lava Falls. Neither Tillotson nor Mather followed up.
Read more »
Posted by jeff ingram at 1/10/2011 07:23:00 PM No comments:

Here are the pages of the Jan 1930 report E.T. Scoyen prepared on his March 1929 auto trip from Zion NP across the Arizona Strip down Toroweap Valley to the canyon rim. The context for this report is described in the other entry of this same date.
In 1974, when these pages were copied at the National Archives, xeroxing was not perfect, so sorry about the fade-outs -- better though than if I had had to copy the pages by hand. The pages are extra large for readability. The bottom of page 4 and top of 5 lost a line or two.
Read more »
Posted by jeff ingram at 1/10/2011 07:01:00 PM No comments:

GCNP Enlargement: A Look Back at the first half century

For half a century, the Powell-Harrison concept of a Grand Canyon National Park centered all subsequent political activity on the boundaries. Those actors could not actually see the Canyon as we can, from a satellite hanging in space far above the Canyon. Nevertheless, Powell had gone through the Canyon all the way; he had spent time up on the plateaus and the rim. He, along with the Ives Expedition, contributed material for this 1873 map, created by George Wheeler: 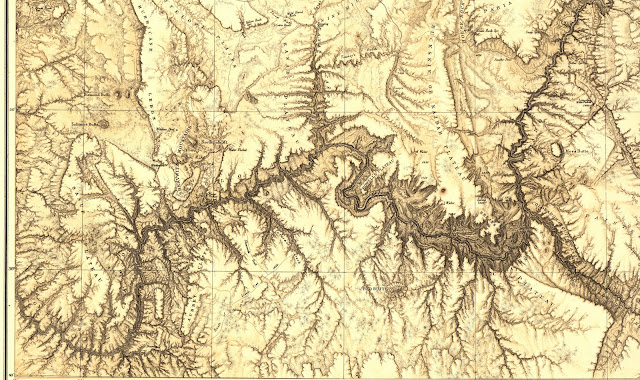 So why did Powell's Park vision narrow it down to the eastern half of the entire Canyon? He could see its extent; he had travelled a good bit of it. And yet, when he came to convince Harrison to introduce a Park bill, he set the tradition of the limited view. For comparison, here is a satellite-derived contemporary view (Google's) of what Wheeler put together using only groundlings' methods: 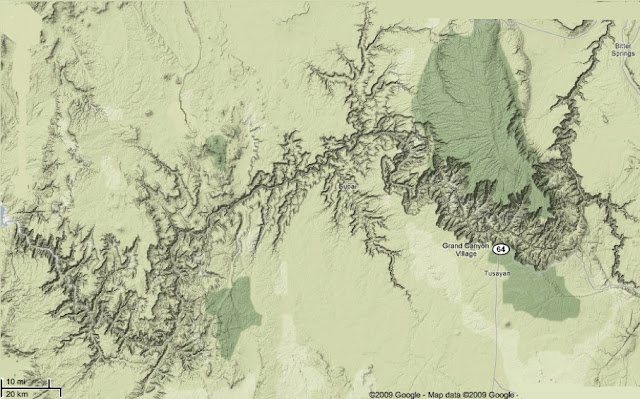 Between the two, it can only be said that the 2009 map is more accurate in details than the 1873 one; it is not truer. They both at a glance tell you about the lateral and side-to-side extent of the Canyon; they both show its complexity and diversity within the entity. So, a mystery: what was Powell thinking?
Read more »
Posted by jeff ingram at 1/04/2011 05:02:00 PM No comments: