Here is the official map of the Committee's deliberation. 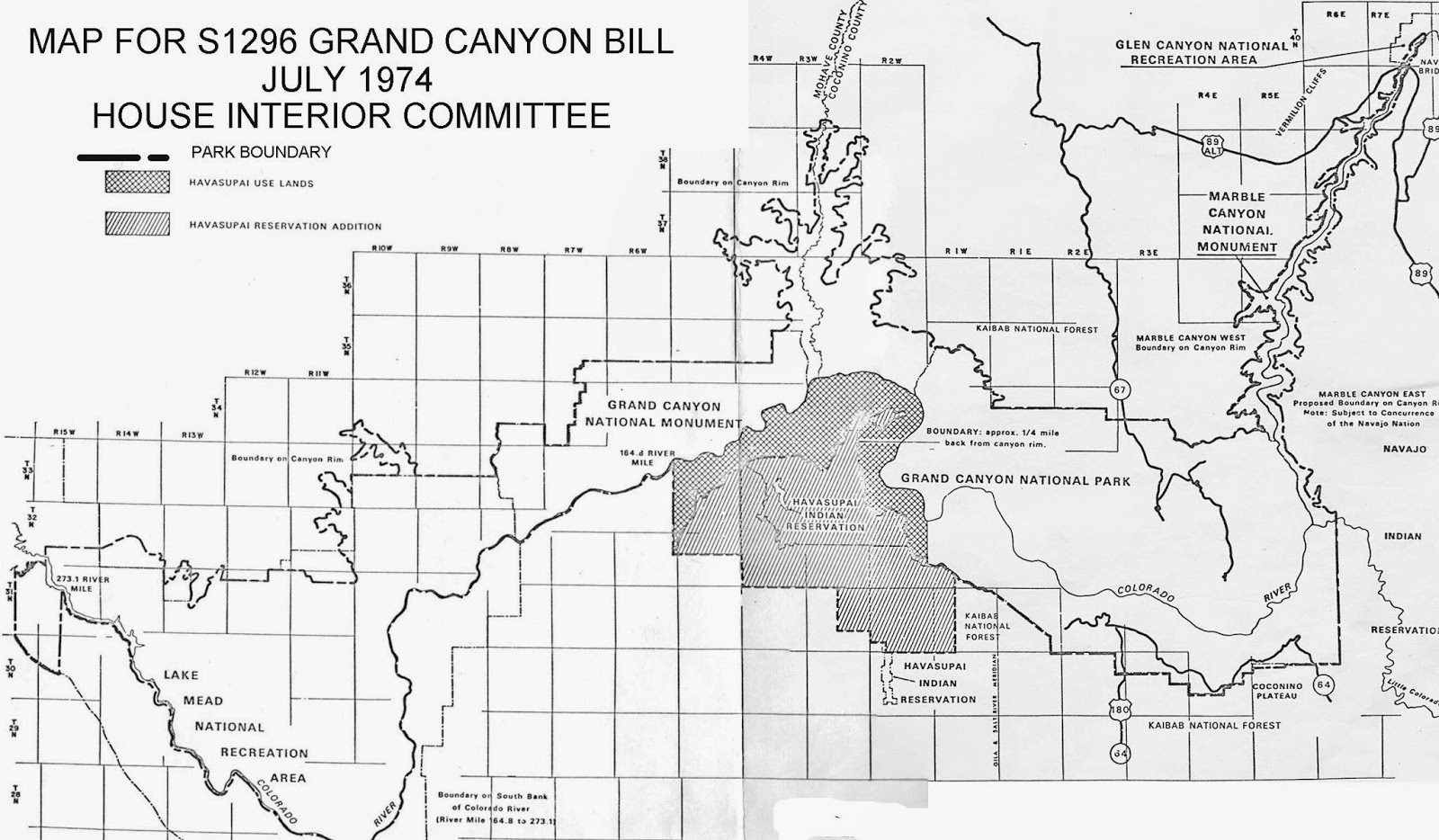 Since parts are hard to read, I will list important map text going clockwise from the upper right corner:


"Navajo Bridge": The Park boundary is at the mouth of the Paria River, though the text refers to the bridge a few miles downstream.
[One way to think about some of these notations is that they were more relevant in an earlier part of the legislative history.]
"MARBLE CANYON EAST   Proposed Boundary on Canyon Rim   Note: Subject to Concurrence of the Navajo Nation" : Goldwater & NPS wanted a rim boundary, but the Navajo would not agree (and still do not), so this notation wistfully suggests it is "proposed", a dream. One might ask then, if the rim is "proposed", where is the "real" eastern boundary?
"COCONINO PLATEAU": Just above the text are the 3 partial sections moved from the Forest to the Park.
The two existing parts of the Havasupai Reservation were labelled. Cross-hatching shows the Use Area; diagonals the Reservation addition.
"BOUNDARY: approx ¼ mile back from canyon rim." This refers to the Havasupai Reservation addition's northern boundary; additional information on crossing Havasu Creek was in the body of the bill.
"164.8 RIVER MILE" AND "273.1 RIVER MILE" identify the points on the Park boundary described as "Boundary on South Bank of Colorado River (River Mile 164.8 to 273.1)"
"Boundary on Canyon Rim" appears twice on the north side to show that the Park was only to include canyon, not any rim land in the Kanab, Whitmore, Parashant-Andrus additiions.
"MARBLE CANYON WEST   Boundary on Canyon Rim": No proposed or concurrences here; the land was all federal to begin with, and the boundary was emphatically on the rim.

The House Interior & Insular Affairs Committee met the morning of 31 Jul 1974 to debate and vote on HR5671/S1296. The rules allowed the action to be witnessed by an audience, and we were there in the first row, the committee ranged on its dais in an arc facing us, Democrats on our right.  In an earlier post, I listed the names, states, and parties of all 41 members. Of course, not all voted, spoke, or even attended.

At the beginning of July, after his visits, McComb thought the Committee was evenly divided between "pro-Park worriers, who were not anti-Havasupai" and "Pro-Havasupai who were as much pro-Udall or Steiger or Kennedy".  He continued his function of supplying Udall & his staff with data, particularly on the acreages involved, measuring what the Park would lose right down to the last acre (I always preferred rounding off). His newsletter of 2 Jul highlighted the transfer, just mentioning the dam threat and pro-Park additions. He expected action on 10 Jul, but shortly after we heard that strip mining legislation had caused a postponement.

Brock Evans, Club DC Representative, considered John to be pessimistic, and to muddy the waters, intended to turn up the burners the week of 17 Jul (sic my journal). He involved another of the DC's office's lobbyists, and went to see Congressman Foley, a leading opponent of any transfer. Although my notes are not conclusive, it appears that he recruited or worked with at least half a dozen allies, and made contact with the whole range of conservation groups. This determined attitude was expressed in a 3 Jul letter from the Club Executive Director to those Club members who were in the districts of Representatives on the Committee, asking them to show concern for the Havasupai, but keep currently protected lands in the Park. Interestingly, the NWF, national group of hunters, wrote to subcommittee chair Taylor against the Havasupai (precedents, again), but said nothing about the additions, which were then stirring up AWF members, as I wrote about in post U2c.


This long narrative (over 50 posts in almost two years) is, I admit, heavily inflected by my having been a long-time advocate for an expanded, a complete, Grand Canyon National Park. So less-Park-friendly advocacies usually feel like intrusions to me; non-Park issues trying to climb aboard the Park bandwagon. In trying to make a comprehensive legislative history, I have preferred to present these other claims -- Havasupai land transfer, pro-dam action, e.g. -- in lumps of their own rather than as companion strands in a common tapestry. Another now needs to be dropped on the table -- the Arizona hunters' lobby, a group that heavily affected the legislation at its history's climax when they appeared in their natural guise as opponents of any Park expansion.

At the very beginning of 1973, when McComb & I were attempting to shape an "Arizona" bill that Goldwater could introduce as a broad compromise, we met with Arizona Game & Fish Dep't officials. Accommodating our desire for a broad Canyon designation and their desire not to lose any hunting grounds (indeed, to gain some), was a major impetus behind the concept of the zone of influence. However, our attempt got so mangled by Goldwater's office that we felt no compunction in using the 1973 Senate hearings to return to our original maximalist position. The failure of our excursion into consensus-building, and our subsequent advocacy of an optimal Park, was the subject of some misunderstanding and even grief. The hunters (organized in the Arizona Wildlife Federation, AWF) and the Arizona Game & Fish Dep't (AGF), among others, did not fully register this change.