The Park Enlargement Law of 1975 included Beaver Falls in the National Park since “in order to assure their protection as part of the national park” the precise boundary is to “cross upstream from the falls”.

Below are scans of the legal items that protect and insure your right to visit Beaver Falls as part of your trip in Grand Canyon National Park, a right Havasupai officials may not stop you from or charge you a fee for exercising.

I. Public Law 93-620, Grand Canyon National Park Enlargement Act, p. 3, Sec. 10(a)
describes the relevant Park boundary in words.
II. Boundary Map 113 20-021 B, Dec 74, Grand Canyon National Park
shows the boundary on the official legislated map. It is hard to read; the following
documents therefore make the crossing point clear, as does the Item V map.
III. Report, Committee on Interior & Insular Affairs, House of Representatives, No.
93-1374, September 24, 1974, Section-by Section Analysis of S. 1296, as
Recommended: Sec.10, p.11 states the “precise” point, underlined in gray, where the
Park boundary crosses Havasu Creek, upstream from Beaver Falls, as approved by
the U.S. House of Representatives.
IV. Conference Report [To accompany W. 1296], ENLARGING THE GRAND CANYON
NATIONAL PARK, December 17, 1974, (3) Havasupai Reservation Enlargement,
p. 6 states that the boundary crosses Havasu Creek at the top of Beaver Falls,
underlined in gray, as agreed to by the House and the Senate, then signed by the
President on January 3, 1975.
V. Map, Secretarial Land Use Plan for the Havasupai Indian Reservation,
March 23, 1982 shows the boundary, in agreement with the official map, as drawn
and approved for the Secretarial Land Use Plan for the Addition to the Havasupai
Indian Reservation.

June newsletter of California’s Colorado Rive Assoc. noted that Sen. Jackson’s statement that the House-passed bill was “not acceptable” was countered by signs of approval from New Mexico’s Anderson, Colorado’s Allott, and Hayden, who was “confident any differences can be worked out”.
It ran a photo of the triumphant Arizona key players: 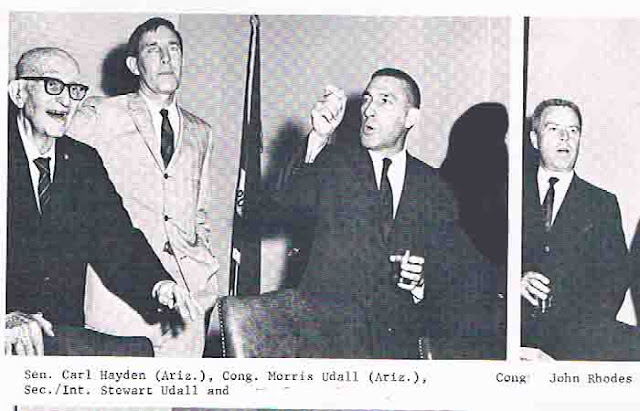 The issue also carried half a dozen little items pertaining to inter-basin water transfers, sounding a bit like whimpers after the softened “bang” from House passage of the CAP bill.

2 Jun, Republic’s Cole reports a May 28 luncheon meeting of Cong. Aspinall and Sen. Jackson, calling it “most fateful meal in Arizona history”. The content of the discussion between “two of the shrewdest bargainers in Congress” was totally secret. Optimism would be indicated if action is resumed on the long-awaited Water Commission bill. Jackson wants any interbasin plans to be studied by the Commission, while Aspinall has moved to have the Interior Secretary prepare a regional water plan. Jackson would be willing to scuttle a CAP bill if it contains any augmentation study. So the luncheon is seen as an optimistic move.

6 May, AP, Big news, no surprise, Senator Hayden announced this was his last term, setting up a November contest between his aide R. Elson and Republican B. Goldwater. Hayden had been Arizona’s first Representative (since statehood in 1912) and then a Senator, a total of 56 years in Congress, a record. At 90, he could see the successful end for his 20-year effort to bring Colorado River water west to Phoenix and on to Tucson, and considered his long record of helping Arizona and the West to develop satisfactorily complete.

8 May, Republic’s Cole’s reported on the next day’s House Rules Committee’s clearance of HR 3300, Aspinall’s version of the Hayden-driven CAP bill, was an emphatic yes to Hayden’s efforts. Four hours of debate were scheduled. Cong. Udall thought one day would be enough to get the bill passed. Aspinall believed it would bring “peace” to the Basin. Saylor stuck in a contrary oar by claiming Arizona should not have given in to California’s demand for a guarantee. However, with all major issues compromised or finessed away, Saylor’s hour of glory in battle would never come.