Reflections of a monument: My interview with Bruce Babbitt

Reader beware. I recorded my September 27, 2012, interview with former (1993-2001) Secretary of the Interior Bruce Babbitt, and then transcribed it. This post is that material, gathered into topics. My goal was to produce his words, smoothed, ordered, and connected for reading purposes, but trying to keep his voice. I did not use quotation marks or paraphrasing.

My main focus was his personal role in, and reflections on, the establishment of the Grand Canyon - Parashant National Monument (the fourth for the Canyon). What I like about this material is that it became a mini-essay on governance in a society in which openness and participation are central values. When "I" is used, that is Babbitt in smoothed quote. Material in parentheses is explanation or bridging for smoothness. In an exchange, B is for B.Babbitt, J for me.

Here is a map of the Monument as it now exists -- . 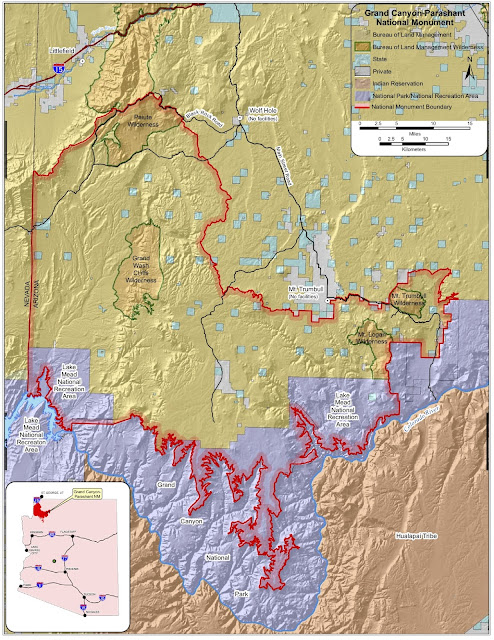 The southern purple part within the red line is in Lake Mead National Recreation Area; the purple south of that is Grand Canyon National Park. The bulk of the Monument is administered by the Bureau of Land Management, and contains three wilderness areas. The light blue, mostly square, patches are state lands, while the gray is private. Extending the black line of the south-going road inside the Monument more or less west would outline the drainage area into the Canyon itself as the eastern "half" (see the second map below). West and north of that line, the drainage is over the Grand Wash Cliffs into Lake Mead.
Read more »
Posted by jeff ingram at 10/28/2012 06:42:00 PM No comments:

The legislative files in Senator Goldwater's archives in ASU's Hayden library that relate to Grand Canyon & the Havasupai are organized by Congress: 91st 1968-9; 92nd 1969-72, 93rd 1973-4, 94th 1975-6. They contain discrete items that ought to build for us a perspective on events, different from that so far presented. However, there is little of the kind of glue that a journal provides, and they even seem not to include items, like intraoffice memos, that might provide more of an inside view. So this entry is more a gathering of items than a complete narrative, which I would have to supply. Thus, for instance, the files contain copies of the Case bills, but no analysis or other comment.

1969
Various parties demonstrate various concerns.
The hunters group, Arizona Wildlife Federation, offered a map with 105 kac deleted and 82 added. Early in the year, a prominent AWF official spent some weeks in DC, in part to discuss Grand Canyon legislation. In summer, their efforts included a fly-over, and a resolution asking for their views to be more seriously considered. The cattle-growers agreed with AWF boundaries.

To start with a personal note, I was in the hospital and missed the hearings. We kept hoping; I prepared a statement (submitted later for the record), and even bought a new suit, having it fitted bedside. McComb did attend and spoke, and I have several pages of notes I took on what he observed. The hearing record is also a help by recording the exchanges between Senator Bible (subcommittee chairman and only Interior committee attendee--Arizonan P. Fannin was the senior member and showed up at the beginning when Goldwater appeared, but did not participate) and witnesses. Then there are the 200+ pages of formal statements, markers of position at one crucial point; perhaps they could be considered "taste tests" of the sausage as then constituted and ground, or even suggestions on how to make the product more palatable.

So from my notes, McComb's report, not necessarily coinciding with the hearing record below:
Fannin stayed for 30 seconds.
Goldwater read his statement and left. He has been twisting arms.
Senator Moss of Utah (a pro-motorboater) showed up to rake NPS Director over the coals for the river companies--spent 25 minutes. Director bad on answering. An aide to Moss said Moss got Goldwater to drop his provisions on river regulation.
The administration is opposed to all; does not want Monument deletions and does want to study Havasupai for a year. Lovegren had committed NPS to exchange, and therefore would have supported Havasupai deletion.
The Forest Service was strong on its positions.
Interior Undersecretary only cared that Havasupai get land.
Hualapai attorney Marks opposed NRA being added to Park; even with concurrence.
Havasupai only ones in support of their request. Thanked Lovegren. When Bible queried, they said they wanted 24,000 acres back, then will not press for Great Thumb. Want an entry fee increase.
Clemons of hunter group against the Havasupai transfer. Wanted the zone of influence defined. Wanted Mt. Emma; supported LMNRA and ok on deletions. Another attacked condemnation absence and Bible agreed.
When timber people said they feared blanket authorization for zone, and wanted it defined, Bible agreed.

Emerson was more hostile than ever before; to McComb, he sounded bitter. At one point, when McComb was asking about some issue, Emerson replied, "You want too much."
Goldwater was seeing Senators personally.

Udall, on the other hand, when McComb met with him, took off his shoes, leant back and listened, asking questions. He was hearing some of this for the first time, and had not been well staffed. After Goldwater had pushed him, Udall had committed himself to hold hearings , but his staffman Bracey was not so certain.
Read more »
Posted by jeff ingram at 10/06/2012 05:17:00 PM No comments:

What is historical proof? A personal shock.

In late September, going through the Goldwater congressional papers stored in Arizona State University's Hayden Library, I found the sheet on which attendees had written their names at the January 29, 1973 meeting in Goldwater's home.

My memories of this meeting are vivid, from sitting next to McComb, to the sense of overall disappointment I wrote about in my journal entry, to the rebuff John & I got from Terry Emerson when we went up to him at the meeting's end to offer our help.

As I read the list of names on the sign-up sheet, once, and again and again, I did not see my name. Literally, the proof of my attendance was not there.

Did I dream it all? Is the past only a matter of constructed pseudo-memories? Should some historian ever try to piece together how Goldwater and advocates for a complete Park came to dagger-points, will I fail to figure?

This is not the first area about which I have had such musings. In recent interviews, I have also pondered whether what I remember could be corroborated, either by physical evidence or other participants, and in some cases concluded that even my strongest memories may have no other support.

Here is another story connecting my comments above with those that follow:


I have remembered all these years that John & I met with Bruce Babbitt about the Navajo position on the Goldwater bill; at the time, 1972, he was an attorney in the firm that was counsel for the Navajo.
When I recently read my journal entry from that time, I had written that we talked with him about the ... Havasupai!
I happened to mention this 1972 meeting to Babbitt when I interviewed him (see below). He quickly corrected me, saying it was the Navajo he represented -- just as I remembered; not the Havasupai as my journal entry said.
I went back and re-read the journal, and concluded based on the content of what we talked about that yes, back in 1972, I had written the wrong tribe!
Memory or written record; could old Henry have been right—History IS bunk?

In my September 27th interview (more on that later) with former Interior Secretary Babbitt about the creation of Grand Canyon - Parashant National Monument in 1998-2000, I recorded this comment of his:  "I am getting senile; I have no memory of this stuff at all."
I am glad I have lots of supporting materials for the memories offered by this decidedly non-senile exemplar of public service.

Otherwise, would it all just evaporate, like a digested madeleine?