As I have written previously, when we were making decisions about how the boundary of the expanded Grand Canyon National Park should run, we did so without going out on the ground, or even, though they were available, using the 1971 7.5’ USGS topos.
As a result, the Park boundary actually goes out beyond the proper extent of the Canyon as indicated by the drainage topography and the geologic indicators according to the 1982 Huntoon-Billingsley  geologic map. Here is the west end of the official map of the 1975 Expansion Act: 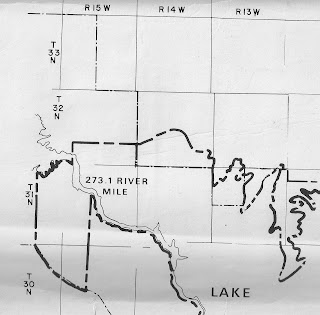 The geology shows only three remaining outcrops — circled in blue below — of pre-Cambrian Muav over Bright Angel, two on the north side, one on the south, of the channel where it bends west at the 277-mile mark.* No more show up downstream. 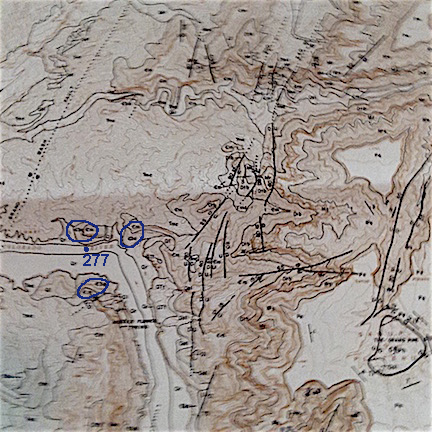 Using those indicators for the Canyon boundary channel crossing neatly ties right into the sharp downward course of the top ridge of the Grand Wash Cliffs on the south side (left bank ) of the Colorado channel, as shown by the blue line below. (Note the blue 277 mile dots.) 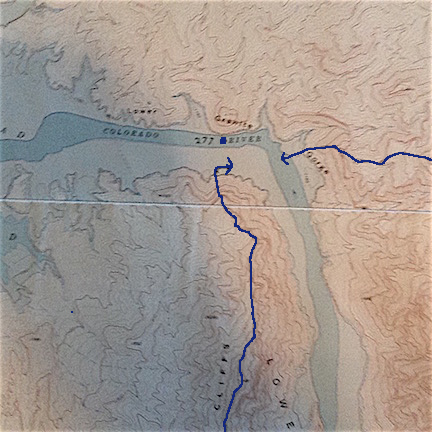 So the only real difficulty in boundary definition, had we done our homework in the late 1960’s and into 1973, would be delineating on the north side (right bank) a course up the lower Grand Wash Cliffs such that the small drainages between Pearce Canyon and the Grand Canyon would be correctly assigned between being in the Canyon’s watershed and, further north, to the Pearce and other Lake Mead drainages. Above, the beginning of that line is shown running east-west.

Once that drainage-defined line reaches the level of the Sanup Plateau, this Google terrain map shows a quite level surface running east-west, with most of that shallow drainage to the north away from the Grand Canyon, until the line reaches Fort Garrett Point, where the dividing line climbs, up to the final level, the Shivwits Plateau.

Taking all these matters into account, and choosing the best path I can, the red crosses approximate the location of the Grand Canyon’s western line, in particular north of the Colorado and over to Fort Garrett Point. The blue line is (approx.) the northside boundary in the 1975 Park Expansion Act. 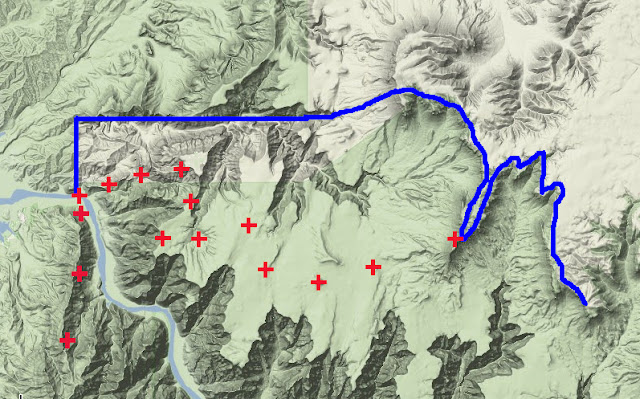 *The topo & geologic maps put the label “Lower Granite Gorge” extending downstream beyond this 277-mile point, though there is no sign of it. The waters and silts of Lake Mead may cover some pre-Cambrian granitics, and if so, this label hangs around on maps as a reminder of the pre-Anthropocene geologic era.