Two  months ago, in the October 2 entry "Origins and Uranium", I tried to trot along with history as it was being spun out. The Hopi and the other long-time Canyon inhabitants were opposing renewed mining activity, in part by embedding their position in the long-running discourse over their origins. To me, that is a logical-enough position in debates over resource/economic exploitation, given that we advocates for the Canyon rely for legitimacy fundamentally on its existence prior to, and not needing the agency of, human beings. Priority is not the only argument, but it can be a boost.

On November 10, Denison Mines Corp., of Canada, waved its plans in the face of a hostile government and environmental advocates' legal action, announcing "it has made a production decision for its Arizona 1 uranium deposit located in north central Arizona.
The mine will be an underground operation utilizing the existing 1,252 foot deep, 2-compartment shaft and employing a combination of long hole and shrinkage stoping methods at a mining rate of 335 tons per day, four days per week. Ore will be hauled by truck approximately 315 miles to Denison's White Mesa mill located near Blanding, Utah. The ore will be batch treated in the mill when 17,000 tonnes are available for processing with U3O8 recovery expected to be 95%. Production is expected to total approximately 857,000 pounds U3O8 [330 t U]."

The Grand Canyon area mines are Arizona 1 and Pinenut (entangled in the tributaries of Kanab Creek, 4-5 miles apart and south of Hacks Canyon) and Canyon on the south side, half a dozen miles southeast from Grand Canyon Airport. Click on the Google button to get a close-up view, and then zoom out to see just how much a part of the Grand Canyon these mines are.

And once there was a forest reserve, what then? There were already miners, such as John Hance, who, like W. W. Bass, were also gurus for visitors, and the railroad, the Santa Fe, to the south. Stockmen, homesteaders, loggers were all in evidence. The Havasupai, Navajo, and Hopi farmed, hunted, visited, traded; traveling through, with some settled down. For all, what would the Grand Cañon Forest Reserve mean in their daily lives in and around the Canyon?

That was the at-the-site question. In Washington and in other places, the framing question had to do with applying the national park idea, as Powell and Harrison had wished in the first place. Was the Reserve a temporary designation, and if not, then what were appropriate boundaries and activities? For instance, why had 17 miles of the northern proposed park been left out of the GCFR? It was, much of it, real forest.

Little seems to be recorded for the Cleveland administration that followed Harrison, although there must have been debate over what the forest reserves were to be. Certainly, the locals were ready to follow the usual pattern. In the mid-1890's, minerals led 140 Coconino County residents, including Ashurst, Heaton, and Bass, to protest the Reserve. September 1897, the stockmen got the U.S. District Attorney to tell GLO that sheep grazing was not harmful; there is too little water, although the stockmen have worked to develop more since the desert range has to be used to make other ranges fully available in summer and winter.

The National Academy of Sciences had set up a Forest Committee. It reported in May 1897, and included a call that the walls of the Canyon and the immediately adjacent area be set apart and governed as a national park. I wonder, did they really visit?

Action began with an Act of June 4 1897 appropriating funds for surveying the reserves, an essential base in the American legal-political system that needs exact, explicit, verifiable lines (nothing so temporary as those drawn in sand) to divide mine from yours. Not so incidentally, this appropriations measure called for protection against fire and selling timber, while allowing settlement, providing water, and not hindering mining or agriculture. Those who thought the forest reserves were for use were reinforced.

In October 1897 Edward Bender was sent by GLO to visit the Canyon, talk with local people, and make a report. The January 31 1898 result has gorgeous language and beautiful handwriting, and although he only spent a day or two at the Canyon, he talked to many people. It is a precious snapshot. Here is the beginning: 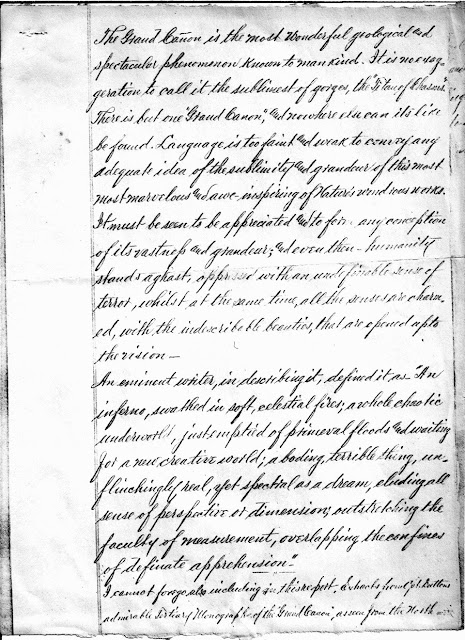