Grand Canyon - Parashant: The Value of a BLM National Monument and BLM's Value of Grazing


For those of us who are both advocates for the iconic status of the Grand Canyon, and also cherish the Arizona Strip, the proclamation by President Clinton in 2000 of the Grand Canyon - Parashant National Monument remains problematic.

When then-Secretary of the Interior Bruce Babbitt first conceived the designation in 1998, he had in mind that part of the Grand Canyon's drainage, not included in the National Park, that included the Shivwits Plateau, Andrus-Parashant Canyon, Whitmore Canyon, the Uinkaret, and Toroweap Valley, with closure from the Grand Wash Cliffs on the west. He described the idea in his 2012 interview with me as "protecting the Canyon by protecting the tributaries all the way up, beyond the rim. We drew the boundary to make the point; we drew the boundaries up here on the watershed, the drainage divide". 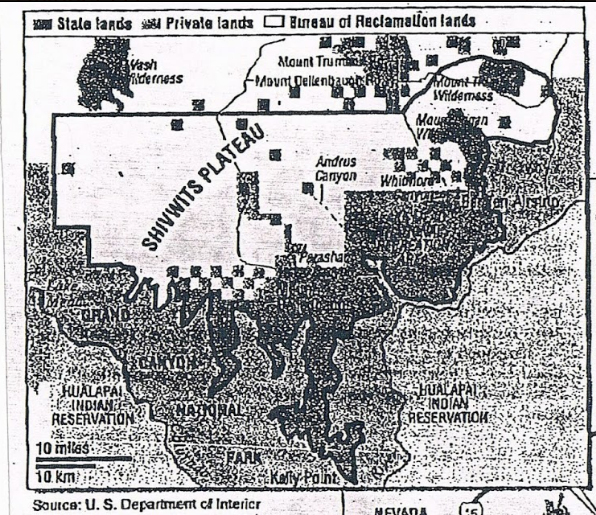 This was a more refined version, from the Bureau of Land Management (BLM): 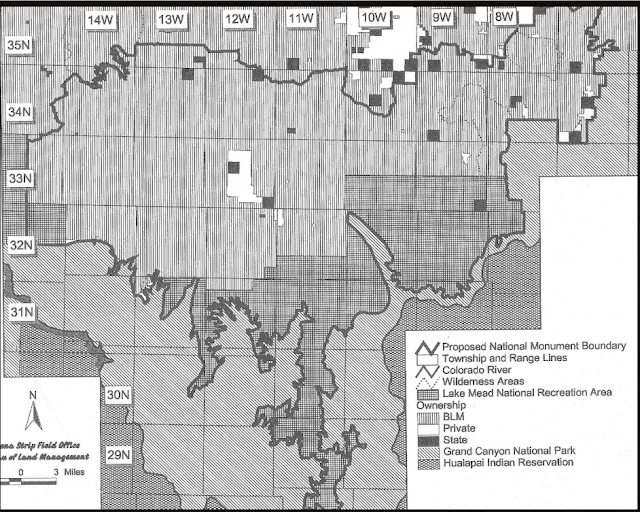 For topographic detail, here is the map for the Grand Canyon area of the Monument in its final form; the red line is the current boundary: 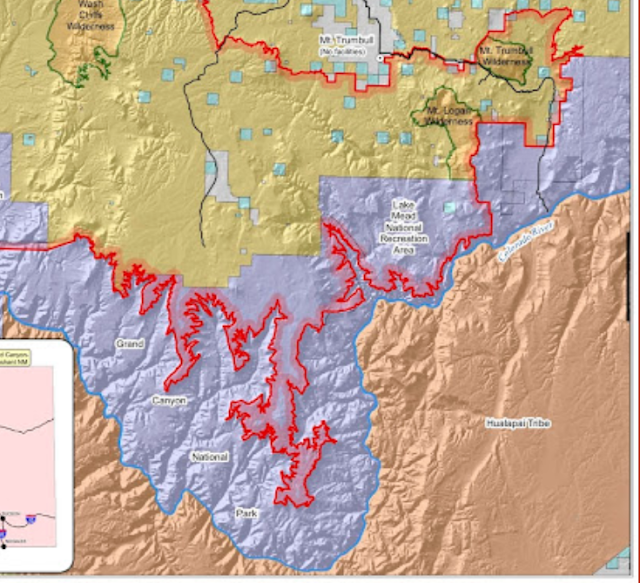 Study of this map will show the Grand Wash Cliffs on the west climbing up to the Shivwits plateau. The black line is the "main road" running along the Parashant, with that Canyon and below it, Andrus, draining to the southeast. Further east is the Whitmore drainage, with its lava flows coming down from the Uinkarets ("Mt Logan Wilderness" & "Mount Trumbull Wilderness" -- although the latter is not actually in the Grand Canyon drainage). Then we slide down into the broad Toroweap Valley and across to the Park.

As the map indicates, the southern part of the Monument was left -- a long-time error -- in the Lake Mead N.R.A., while the northern area colored yellow remains part of Bureau of Land Management's Arizona Strip District.

I called this designation "problematic". Problem 1 is indicated by the fact that the red lines run away off to the north and west, such that the final form of the monument was over double the size of Babbitt's original and defensible conception that would have presented to the public Grand Canyon designations that actually delineated this part of the Canyon. The north and west area of the Grand Canyon - Parashant N.M. is neither Grand Canyon nor the Parashant, but actually drains to the west, into Lake Mead downstream of the Canyon itself.

The doubling of the Monument occurred when, unfortunately, Babbitt was quietly and successfully lobbied by those putting forward ideas about a designation that would piggyback their conception of a wildlife preserve. So, problem 2 is that the logic of a Grand Canyon "completion" was lost, while, and this is the ironic part, the resulting Monument took the steam out of recognizing the entire Arizona Strip for its wildlife values. So too big on the one hand; too small on the other. I am entirely in favor of the Antiquities Act power, but this case shows why public consideration and debate in the arenas of Congress have at least the potential for avoiding queer mistakes based on clandestine decisions made out of the public limelight. Still, who knows, an enlightened future advocacy might rectify these "problems"; -- certainly something ought to be done about Grand Canyon National Park's boundary, incorporating as it does a number of missteps.

PROBLEM 3: WHY BLM?
First, lets hear from Secretary Babbitt, per that 2012 interview:
He started off on a hopeful level:

"(Grand Canyon National Park Superintendent Arnberger) was smart enough to be listening to me. He heard me explain what I wanted to do (was to) put these monuments under the jurisdiction of BLM in order to give it a conservation mission... What I told Arnberger was we’re not creating monuments and transferring them to Park Service anymore... We had another objective here, BLM, to put it into a conservation mode. You can't do that by simply taking all their crown jewels and giving them to the Park Service.
We had set up this Landscape Conservation System, which is now in law, but it wasn’t then. I mean it was an executive order when I left office. And it was significant, because it was a way sort of embedding these ideas in BLM, and giving them some resources."

Then he injected some realistic caution about how BLM would behave:


"Now what went on at the level of some of the management plans; it was perhaps a different story, the real skirmishes in the BLM are over the RMPs (range management plans), and you know, it’s a very structured planning process. You can make a lot of mischief in it. And the issue in the RMP up here, as I recall, in the, at Parashant, was off-road, was off-road use, and by the time the RMP process came up, some of the groups had kinda been alerted. This is all in the Bush administration, and Im not really up-to-date on that. But by then, they had really started…You know there is a trade-off here, because if you put something into the Park system, they’ve got a much stronger bureaucracy and they’ve got the charisma of public opinion, and it’s a little harder to run over the Park Service than the BLM, although this is all relative, as they say."

"You can make a lot of mischief in (range management plans)." Yes indeed; problematic.

In the first half of this quote, Babbitt sets an aspirational goal for BLM officials. This was not entirely foolish. Those of us who were around 50 and more years ago remember the Arizona state BLM Director who had the foresight to set aside Aravaipa and the Vermillion Cliffs as protected and scenic areas. And the Arizona Strip is certainly the kind of place where such aspirations make great sense. I dont believe that those who have made their homes in and near that piece of the "Old West" want it to be turned over to Las Vegas mass tourism. And of course, it is the northern hinterland and approach to the Grand Canyon.

However, in the second half, Babbitt puts his finger on the sore place where BLM aspirations for its Landscape Conservation System are tested, pressing down with the Park Service's "charisma" and "stronger bureaucracy". And I want to press too, asserting the primacy for Grand Canyon lands of our highest standards of protection and public uses.

Twice in recent years, BLM range (for grazing) planning has had the opportunity to privilege those standards: in the west side of the Kanab Creek Wilderness and more recently in the eastern Grand Canyon - Parashant N.M. on a grazing allotment that includes Toroweap Valley and much of the Uinkaret Plateau (including the Mount Trumbull Wilderness).

Both of these areas are of maximum recreational value, ranging from unroaded wild lands to that best kind of back-road visitation the Strip is noted for. Further, they contain high values for the evidences of human occupation back 2000 years and more. And again, they are  integral parts of the Grand Canyon and its immediate hinterland.

The RMPs for these areas therefore presented BLM with the opportunity to answer positively this question: Should lands valuable for their Park-worthiness, lands assigned to the Babbitt-inspired Landscape Conservation System just so they could be managed for that Park-worthiness, be left under BLM administration? In neither of these two cases, did BLM answer this question positively, leaving intact what might be called "historical" (to avoid the words "marginal" or "political") grazing use.

My respect for Bruce Babbitt as an administrator of our western patrimony is high; however, I must disagree with his hopefulness that BLM could place its protection and presentation of Park-worthy lands above protection of its mundane interests.

The Grand Canyon lands in the Arizona Strip, the north side of the Colorado, belong in the National Park, permitting unified, appropriate presentation and protection of the Canyon's entire north side, from the Paria River to the Grand Wash Cliffs.
Posted by jeff ingram at 5/09/2019 01:10:00 PM

The TAB for DAMS

brings up entries on

the history of efforts